March 30, 2013
Easter is here, and so a little weekend's diversion. I thought I would have a little fun with Planck maps of the CMB sky we looked at previously. As a reminder, here's what Planck saw

and what the blue and red spots indicate are structures in the Universe when it was only 400,000 years old.

As I mentioned last time, we describe the structure we see in terms of spherical harmonics, which are particularly useful functions to use on a sphere, and the power spectrum basically tells us how much of a particular function we need to add in to get the map above.

But we have a freedom, called the "phase" of the spherical harmonics. Basically, while the power spectrum tells you much of a function you need to add, it doesn't tell you how to orient it. So we can mix up the phases and make another realisation of the CMB sky.

So, this is what I did. I again used healpix and grabbed a power spectrum from CAMB, and started making my own CMBs. Here's a few I made earlier :) 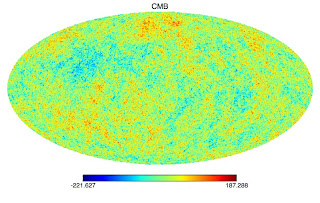 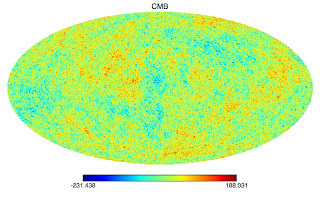 How cool is that? They look like the observed CMB maps (which, of course, they must!)

But what are these other realizations? Well, the view from each point in the Universe will have a differing view of the CMB, but the power spectrum must be the same, so the only thing that varies from place to place must be the phases. And given that the Universe is infinitely large, I figure that every combination of phases must be realised somewhere, and so these are views of the CMB from some locations out there in the Universe.

Which got me to thinking... There must be some randomly selected combination of phases that results in apparent structure in the CMB map. There must be places where the spherical harmonics line-up in such a way to make a recognisable image! What kind of thing could you get?

Well, a bit of mucking about on a Saturday morning, while watching Good Game Spawn Point, resulted in the following 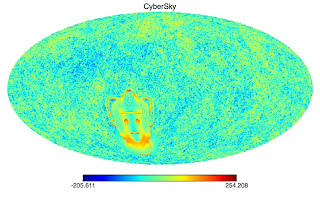 Of course, I put the image in there, and kept the phases, but I changed the amplitude of the raw power spectrum to match that predicted by our theoretical models. And just to prove it, here's the input (theoretical) power spectrum over plotted on the power spectrum for the above map. 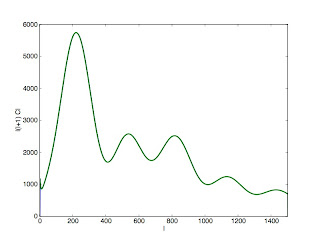 Can only see one curve? That's because the two sit exactly on the top of each other. We could add any picture to the CMB, such as the Mona Lisa, or David Bowie, and I'm sure we could play this game.

Realistically, most places in the Universe with have phases that give the random blobs seen in our view of the CMB skies, and combinations of phases that give us recognisable structures on the sky would be very, very rare.

But, again, given that the Universe is infinite, I would like to think that there is a spot in the Universe where the phases can combine to give us the "Cyberman in the Sky" map above.

I wish it was right here. That would have made for a very interesting Planck Press Release!
Big Bang Cosmology
Location: Sydney NSW, Australia