A kinematic study of the Andromeda dwarf spheroidal system

March 16, 2013
Argh!! Another couple of weeks have flown by like a huge fast flying thing! So fast, I almost missed my birthday (which I share with another random person). And the pressure ain't off, so a quick post.

This time, a great paper by Michelle Collins.

As you will have guessed by now, we've been doing a lot of work on the dwarf galaxy population that orbits around our nearest large cosmological neighbour, namely the Andromeda Galaxy. We, and other groups, have been measuring lots of properties of these dwarfs, including their positions and distances. Over the last few years, we've also managed to get the spectra of many stars in the dwarfs which, for one thing, allows us to measure the velocities of stars (via the famous Doppler effect).

Michelle's paper focuses upon the velocities found in 18 of the 28 dwarfs we know live near Andromeda, and basically tries to find out lots of the nature of the dwarf population - such as are they all the same, or different, and how?

The paper is a monster, more than 40 pages, so I can't go into depth on every thing we did, but here's a nice couple of illustrations.

This shows how we identify stars in the dwarf itself 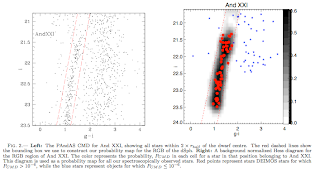 These are Colour-Magnitude Diagrams, which basically plot the colour (a proxy for temperature) across the bottom, and brightness (in magnitudes) up the side. A look at the left-hand plot has lots of dots, and these are a mix of stars in the Milky Way (for us, annoying contamination) and stars in the dwarf we are looking at. In the red dotted lines, you can see there is a well defined sequence, and this is the Red Giant Branch (RGB) of stars in the dwarf - basically, the ones we are after.

Without going into too much detail, Michelle has developed a method to find out, in a probabilistic sense, which stars are most likely to be the RGB stars we want, and which are contamination (as seen in the right-hand panel).

But even when you plonk down your spectrograph and collect the velocities of stars, how do you know what is in the dwarf and what's not. Here's a picky of the distribution of velocities in one of the dwarf fields 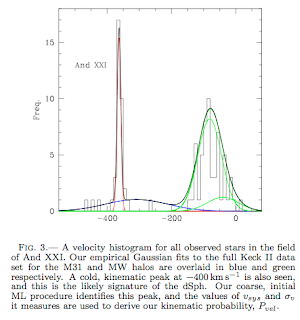 As you can see, there is a broad spread in the velocities we see, from zero to almost -600 km/s. The big broad components come from our own Milky Way (the velocities closer to zero) and Andromeda, centred around -300 km/s, but quite clearly, in red, there is a strong spike in the velocities, and these are the stars in the dwarf. Cool eh? 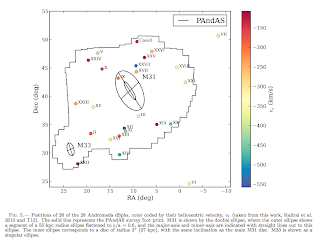 The ugly shape in there is one we have seen before, the footprint of the PAndAS survey.

So, what have we learnt? I wish I could put it in a couple of sound-bites, but that's going to be tricky, and being time-squeezed means I don't have a lot of time to type more, but here's a couple of the highlights. 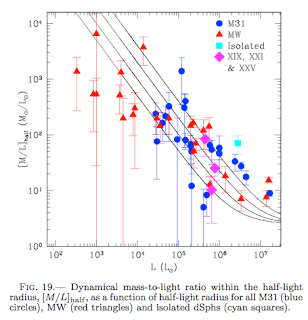 This is luminosity on the bottom and mass-to-light ratio (basically, how much dark matter is in the dwarf) in the side for a mix of dwarfs from Andromeda, the Milky Way and in the Local Group. What we can see is a very strong trend, such that the less luminous an object is, the more dark matter it has relative to the stars. The littlies are the most dark matter dominated things about (although there is a whole 'nother blog post in that statement). 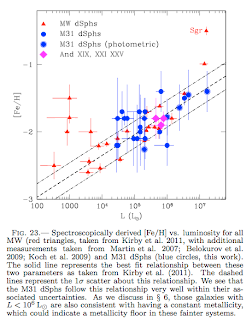 This is again luminosity on the bottom, and metallicity, or how chemically enriched the stars are, up the side. Clearly, the more luminous ab object is, the more chemically enriched it is. This also makes sense, as larger systems can hold onto their gas and have several generations of star formation, which continually enriches the gas, where as lower mass galaxies can more easily lose gas in supernovae explosions.

In summary, we've learnt a lot, but there is a lot to learn.

A kinematic study of the Andromeda dwarf spheroidal system


We present a homogeneous kinematic analysis of red giant branch stars within 18 of the 28 Andromeda dwarf spheroidal (dSph) galaxies, obtained using the Keck I LRIS and Keck II DEIMOS spectrographs. Based on their g-i colors (taken with the CFHT MegaCam imager), physical positions on the sky, and radial velocities, we assign probabilities of dSph membership to each observed star. Using this information, the velocity dispersions, central masses and central densities of the dark matter halos are calculated for these objects, and compared with the properties of the Milky Way dSph population. We also measure the average metallicity ([Fe/H]) from the co-added spectra of member stars for each M31 dSph and find that they are consistent with the trend of decreasing [Fe/H] with luminosity observed in the Milky Way population. We find that three of our studied M31 dSphs appear as significant outliers in terms of their central velocity dispersion, And XIX, XXI and XXV, all of which have large half-light radii (>700 pc) and low velocity dispersions (sigma_v<5 km/s). In addition, And XXV has a mass-to-light ratio within its half-light radius of just [M/L]_{half}=10.3^{+7.0}_{-6.7}, making it consistent with a simple stellar system with no appreciable dark matter component within its 1 sigma uncertainties. We suggest that the structure of the dark matter halos of these outliers have been significantly altered by tides.