On the good ship Volendam I wasn't just enjoying myself, I was there to lecture astronomy. The trip trundled from Darwin to Perth, calling in at the islands of Komodo and Lombok in Indonesia.

To pay my way, I had to give five lectures. I wasn't sure who the audience was (it turned out to be mainly people over 60, but from a range of nations), so I talked on
As well as me, there was also Victor Gostin of the University of Adelaide, who spoke on the geology and geophysics of South East Asia and Australia - did you know there was a now drowned continent called Sundaland (not to be confused with Sunderland!)? I didn't, and I think it was cool. Here's a map from wikipedia. Anyway, I think that the lectures were well received. It was good fun, and people were very interested (it was hard to get more than a few feet at times without people asking questions). I would happily do it again.

There were a bunch who were not interested in talking tho, and they lived on the island of Komodo. No matter what you said, they never cracked a smile, and when they want to go for a walk, you just get out of their way. Here they are 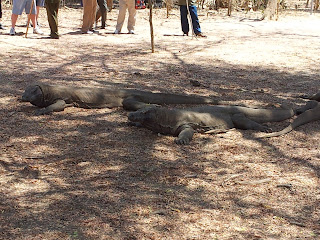 They looked pretty big in the zoo in Sydney - they looked larger in the wild!

Anyway, astronomy has moved anon while I was traveling, so I have a few posts to catch up on. More soon.