Dynamics in the satellite system of Triangulum: Is AndXXII a dwarf satellite of M33?

November 23, 2012
I am playing serious catch up here, as we've had a wee flurry of papers accepted in the last few weeks, and I want to make sure they all get a mention. The good news is that I should have plenty to post over the Twilight Zone of the Christmas/New Year Period.

Today's paper takes us back to M33, and a bit of a curly question. As we've seen over recent papers, we've seen that the larger Andromeda Galaxy has a large population of dwarf galaxy companions, at least about 30 of them buzzing around (although not randomly, something I will come back to in the New Year).

M33 is about a tenth the size of Andromeda, and so we have the question "Does M33 have any dwarf galaxies of its very own?" This is actually a little complicated because M33 is in orbit about Andromeda, and passed near the larger galaxy a few billion years ago. It will do so again in a few more billion years.

Here's a map of the dwarf galaxies that we have found in the PAndAS survey, taken from the excellent paper by Jenny Richardson. 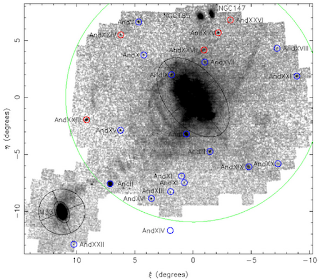 We can see the circled black blobs - these are the dwarf galaxies. But look down in the bottom-left-hand corner, just below M33 there is a little dwarf galaxy, And XXII (kids, a piece of advice. When you start a new survey, using roman numerals might make you look a little smart, but once you have more than a handful of objects, they are a pain!).

Now, And XXII looks very close to M33, so perhaps it is actually orbiting M33 (which, in turn, is orbiting M31). But how would be know?

It all comes down to the relative distances and speeds of the various objects of interest. Clearly, if they are separated by a huge distance, then they are likely to have nothing to do with each other, and we have nothing but a chance projected alignment.

Even if they are physically close, if the dwarf galaxy is moving relatively slowly with respect to M33, it could well be in orbit, but if the speed is to fast, then And XXII could be whizzing along on its own orbit of Andromeda, and happens to be just passing M33.

So this is the subject of this new paper, Dynamics in the satellite system of Triangulum: Is AndXXII a dwarf satellite of M33?, by collaborator-of-mine, Scott Chapman. The paper is quite involved, but includes the measurements of the velocities of stars in And XXII, using the DEIMOS spectrograph on the mighty Keck Telescope.

Why do we need such a big telescope? Because these stars are faint! Between 21st and 23rd magnitude (and if you are not sure what that means, take a look at this, and remember that we are not just taking an image, but are dispersing the light to get a spectrum!).

As ever, the question is never as straight-forward as it seems, as it depends on how much dark matter is swirling around M33. But we know that M33 has been violently shaken in the past due to its close pass of M31, and its dark matter will have also been shaken and some stripped off. 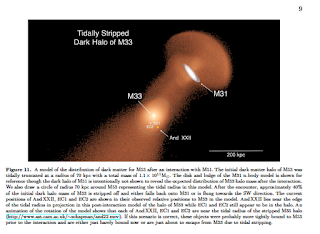 Basically, yes And XXII is a candidate for the first dwarf galaxy of M33, but as M33 loses its dark matter halo, it is going to become less and less bound to the little galaxy and will end up orbiting M31! Maybe this is how Andromeda got lots of its dwarfs? This is a subject we will return to soon!

Dynamics in the satellite system of Triangulum: Is AndXXII a dwarf satellite of M33?


We present results from a spectroscopic survey of the dwarf spheroidal And XXII and the two extended clusters EC1 and EC2. These three objects are candidate satellites of the Triangulum galaxy, M33, which itself is likely a satellite of M31. We use the DEep Imaging Multi-Object Spectrograph mounted on the Keck-II telescope to derive radial velocities for candidate member stars of these objects and thereby identify the stars that are most likely actual members. Eleven most probable stellar members (of 13 candidates) are found for AndXXII. We obtain an upper limit of sigma_v < 6.0 km s-1 for the velocity dispersion of AndXXII, [Fe/H] ~ -1.6 for its metallicity, and 255pc for the Plummer radius of its projected density profile. We construct a colour magnitude diagram for AndXXII and identify both the red giant branch and the horizontal branch. The position of the latter is used to derive a heliocentric distance to And XXII of 853 pm 26 kpc. The combination of the radial velocity, distance, and angular position of AndXXII indicates that it is a strong candidate for being the first known satellite of M33 and one of the very few examples of a galactic satellite of a satellite. N-body simulations imply that this conclusion is unchanged even if M31 and M33 had a strong encounter in the past few Gyr. We test the hypothesis that the extended clusters highlight tidally stripped galaxies by searching for an excess cloud of halo-like stars in their vicinity. We find such a cloud for the case of EC1 but not EC2. The three objects imply a dynamical mass for M33 that is consistent with previous estimates.