Unearthing Foundations of a Cosmic Cathedral: Searching the Stars for M33's Halo

October 20, 2012
The Stellar Halo of a galaxy is a tenuous population of stars and other things surrounding the the bright spiral disk that characterises galaxies like our own Milky Way. Some of the oldest, most pristine, stars that we know can be found in the halo of our own galaxy, and so they provide clues to the processes that bought large galaxies into existence.

The problem is that they are, well, tenuous. When we look for halo stars in our own Milky Way, we have to sift through a sea of nearby fainter stars, to pick out the giant stars that are far away.

I've mentioned before about my work with the Pan-Andromeda Archaeological Survey, which has been mapping out the stars of our nearest large neighbours, the Andromeda and Triangulum galaxies.

Now that all the data is in, we're dissecting the various stellar populations in the vicinity of these tow galaxies, especially with regards to the large amount of substructure (the left over remnants of disrupted systems). But also we want to measure the shape and extent of the stellar halos.

But it is hard work. These things are still faint, and we still have to trawl through the contamination from our galaxy. Although it's important to remember that we are not hear to do the easy things!

And this is precisely what Rob Cockcroft of McMaster University has done. For the first time, we have measured the density of stars in the halo!

So here is an example of what we have to deal with. We see all the stars towards Triangulum (M33), but in the lots are in our galaxy (Disk and Halo), as well as there being misclassified galaxies in there as well (when something is small and faint, without a spectrum, it is hard to tell things apart). 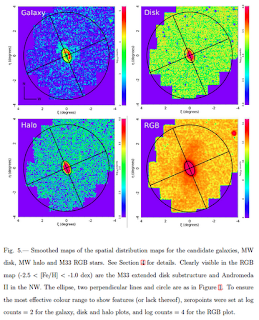 Once we have cleaned all the contamination out of the way, we can actually try to measure the density drop off of what is the stellar halo. And this is it! 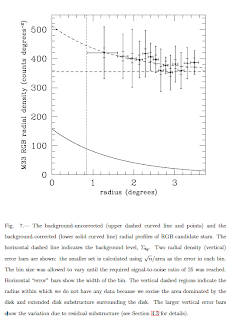 The important curves are the dashed ones with the data points on there. You can see that there are large error-bars, but this is because the measurement is hard. If we could do this and get really small error-bars, then someone would have done it years ago with crappier data and gotten large error bars :)

So, M33 has a faint halo of old stars, and now we need to think a little about just what it is telling us about the formation and evolution of this little galaxy (it is about 10th the mass of the Milky Way).

Just to give you an idea of what we are dealing with, now we have measured it, we can calculate that the total brightness of the halo represents less than 1% of the light emitted by the entire galaxy!

Unearthing Foundations of a Cosmic Cathedral: Searching the Stars for M33's Halo


We use data from the Pan-Andromeda Archaeological Survey (PAndAS) to search for evidence of an extended halo component belonging to M33 (the Triangulum Galaxy). We identify a population of red giant branch (RGB) stars at large radii from M33's disk whose connection to the recently discovered extended "disk substructure" is ambiguous, and which may represent a "bona-fide" halo component. After first correcting for contamination from the Milky Way foreground population and misidentified background galaxies, we average the radial density of RGB candidate stars over circular annuli centered on the galaxy and away from the disk substructure. We find evidence of a low-luminosity, centrally concentrated component that is everywhere in our data fainter than mu_V ~ 33 mag arcsec^(-2). The scale length of this feature is not well constrained by our data, but it appears to be of order r_exp ~ 20 kpc; there is weak evidence to suggest it is not azimuthally symmetric. Inspection of the overall CMD for this region that specifically clips out the disk substructure reveals that this residual RGB population is consistent with an old population with a photometric metallicity of around [Fe/H] ~ -2 dex, but some residual contamination from the disk substructure appears to remain. We discuss the likelihood that our findings represent a bona-fide halo in M33, rather than extended emission from the disk substructure. We interpret our findings in terms of an upper limit to M33's halo that is a few percent of its total luminosity, although its actual luminosity is likely much less.