October 13, 2012
OK, it's been a very good week (for reasons that will become clearer in the near future) and so I am going to take a breather for half an hour for a little recreational mathematics. The question is all about catching the bus.

One good thing about living in Sydney, which I've noted before, is that it easy to get to see international rugby at the Olympic Park. An excellent free bus service is provided to bring people in from the far-reaches of Sydney, and then take them home again.

It is quite impressive that it works, with tens of thousands of people pouring out of the grounds and onto buses quite efficiently.

OK, the question is easy if the people arrive at a fixed regular intervals, as do the buses. But we are not here to do the easy things.

Imagine you are on the gate of the park, watching the buses leave. What's the distribution for the number of passengers on each bus?

The problem requires two parts, both based on the Poisson distribution. I mentioned this in the recent discussion on the German tank problem, but it is an extremely powerful description of random events, from the drops coming from a tap, the number of photons arriving at a detector, and, quite famously, the number of men kicked to death by horses in the Prussian cavalry.

The other side of the coin is that you can use this distribution to calculate the time between events, which is what we want to use to describe the time between buses arriving. It turns out that this is an exponential distribution, and the probability of a bus arriving between t and t+dt after the last one is

This means that there are lots of short gaps, and fewer long gaps between buses arriving. Now, real buses don't follow such a distribution in detail, but let's stick with this because the maths gets more funnerer.

Why is there a distribution? Well, people are dribbling in at random and in the same time interval there might be one person, or two, or ten or even none.

OK, we cans stick the two equations together and ask the question "what is the distribution of number of people leaving on the buses?" What we end up with is an expression that looks like this.

Why is there an integral in there? Well, multiplying the two probabilities gives us the distribution of the number of people on a bus, after a waiting time between t and t+dt. A little algebra, this becomes

What is that? The final probability distribution depends upon a rather mysterious quantity called the Gamma function. I could write a long post on the gamma function, but seeing that we are only interested in integer values (because we can only have whole numbers of passengers on the bus), then we know that 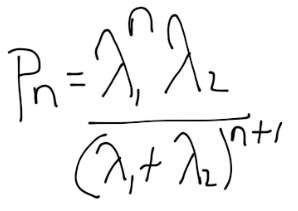 The distribution of the number of passengers becomes

Cool huh? Let's ask the question, what is the probability that a bus has no passengers? Popping n=0 into the above, the chance of this is 1/2. And the chance that a bus has one person on it is 1/4, and 2 people is 1/8.

In fact, we have a pretty interesting progression here, and it has been known from antiquity that 1/2+1/4+1/8+.... = 1, which is what you want all of the probabilities to add up to.

Let's consider a more realistic scenario, with 1000 people per hour arriving at the bus stop, and 20 buses per hour. What does the distribution of bus occupancy look like? You might think that it is most likely that there are about 50 people on each bus. Here's the distribution 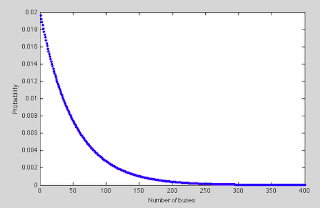 The most likely number of people on a bus is zero! And lots of the buses have only a hand full of people of them, while some are jam-packed with more than 150 on the bus - Standing room only!

You might think that chucking more buses per hour is a solution to the problem, but we always have this shape. The most likely number of people on a bus is zero. Throwing less buses doesn't help either, the most probable number of passengers is zero. Luckily this is not how real buses at Sydney Olympic Park operate, or we would never get home!

One last question then, as I am cooking pizzas tonight and need to get started. Let's imagine that you are not the gate guards, but a passenger, just a random passenger. What's the most likely number of passengers on the bus (including you)?

While the most probable number of passengers on a bus is zero, there is no one there to see that. And while there are lots of buses with 1 person on, it is actually unlikely to be you (I know this might sound a little paradoxical, but think about it). 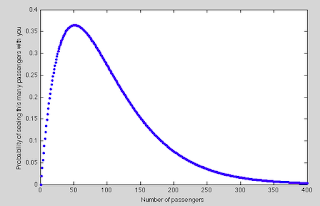 This is the case that we looked at above, with 1000 passengers per hour, and 20 corresponding buses. Most people will report that they were comfortably on a bus with a total of 50 passengers, while only a few will report they were on really empty or really full buses, even though the guards on the gate say that many buses were leaving with virtually no one on them, and a few very very crowded.

And while you are chewing that over, I'm off to do some cooking.
Intermission
Location: Sydney NSW, Australia