May 17, 2012
I've finally succumbed to the sickness sweeping the land, and find myself wide awake at 5am (this is not really a natural state for an astronomer). So, as I sit here with sore throat, a quick post for you.

Blair Conn, my ex-student and now Humboldt Fellow in Heidelberg, and I, have had a paper accepted for publication in the  Astrophysical Journal. The focus of the paper is the Monoceros Ring, a vast "stream" of stars that appears to circle at the outer edge of the Milky Way galaxy. 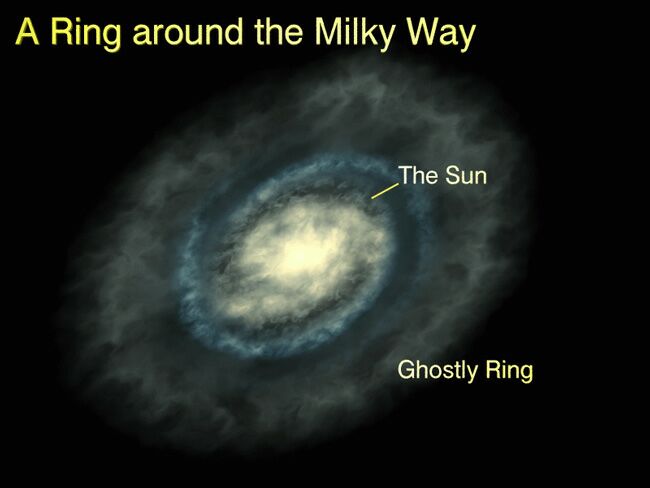 The ring has had a bit of a checkered past, not its existence, but its origin.

People generally fall into two camps, those that think that Monoceros is just a natural piece of galaxy, a region of the stellar disk that has been puffed up (also known as the flare or warp of the disk), whereas others think the ring is the debris from a dwarf galaxy which was tidally disrupted when it came to close to the disk of the Milky Way. Potentially it is the debris from the Canis Major Dwarf Galaxy, a little galaxy thought to be nestled into the disk of the Milky Way. The problem is that the Monoceros Ring is immense on the sky, and to map it in detail takes a lot of work. But it is this mapping that is required to get a chance to tell the difference between the two ideas.

Which brings us to Blair's paper. If you want to map an immense structure, you need a big field of view, and one of the biggest, on one of the best telescopes, is Suprime-Cam on Subaru in Hawaii. IMHO, this is one of the best imagers in the world (and it's only going to get better, but that's for another post).

Superime-Cam was used to take a number of deep fields in directions away from the disk of the Milky Way in three strips. 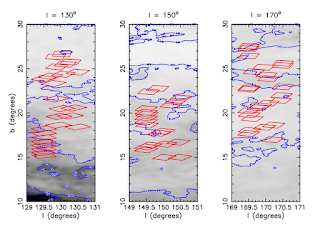 The red regions are the fields (distorted as we are looking at a large patch of sky on flat paper). The grey underneath is the extinction due to galactic dust. This dust is the real bane of astronomers!

Cutting to the chase (as I need to get a shower and get to work) what do we find. Well, the distribution of stars in these fields (in terms of how many and how far they are) appear to match both the models, the galactic and extra-galactic source for Canis Major.

But!!! it appears that the chemical composition of stars in the ring is different to that in the disk of the Milky Way, strongly suggesting that the stars in the ring are not simply puffed up from the galactic disk. Maybe Monoceros really is an extragalactic invader?

However, experience has taught me that evidence doesn't strongly sway peoples' viewpoint on things, and I am sure that we will here counter claims about its origin. But this is fun and how science is done. Well done Blair!


We derive distance, density and metallicity distribution of the stellar Monoceros Overdensity (MO) in the outer Milky Way, based on deep imaging with the Subaru Telescope. We applied CMD fitting techniques in three stripes at galactic longitudes: l=130 deg, 150 deg, 170 deg; and galactic latitudes: +15 < b [deg] < +25 . The MO appears as a wall of stars at a heliocentric distance of ~ 10.1\pm0.5 kpc across the observed longitude range with no distance change. The MO stars are more metal rich ([Fe/H] ~ -1.0) than the nearby stars at the same latitude. These data are used to test three different models for the origin of the MO: a perturbed disc model, which predicts a significant drop in density adjacent to the MO that is not seen; a basic flared disc model, which can give a good match to the density profile but the MO metallicity implies the disc is too metal rich to source the MO stars; and a tidal stream model, which bracket the distances and densities we derive for the MO, suggesting that a model can be found that would fully fit the MO data. Further data and modeling will be required to confirm or rule out the MO feature as a stream or as a flaring of the disc.