The Lives of High Redshift Mergers

May 06, 2012
Our office move has been completed, and I must admit that I am very pleased. The offices are swish, the french patisserie at the end of the street is superb, my walk to the trains has been cut in half, and I love my glass office wall/whiteboard. Time to get back to some work.

And to kick things off, my PhD student, Tom McCavana, has gotten a paper accepted for publication in the Monthly Notices in the Royal Astronomical Society. It's a bit of a complex tale, but the underlying question is simple, namely how do galaxies grow over time?

We know from Cold Dark Matter model for the Universe that they grow over time through the accretion of smaller systems. Here's a little movie illustrating such a growing galaxy
Looks cool eh? These movies are generated in massive simulations of structure growth, something you need supercomputers for. The problem is that most simulations are not the complete picture, as they only consider the evolution of dark matter, as the complex physics of gas and star formation make the simulations hard to do.

So, the technique which is often applied is to do a dark matter only simulation, and paint on galaxies in what is know as semi-analytic techniques.

What is important is to really know the details of how galaxies form over time, and know know what happens with smaller accreting blobs. But there is a dilemma. You can either do a large simulation of the Universe, looking at the accretion histories of lots of galaxies, but the problem there is resolution. To simulate large chunks of the Universe, even with lots of particles, the smallest mass you can consider can often be larger than the dwarf galaxies we see around us today. We just can't catch the detail.

So, you can simulate a single galaxy in detail. But the problem there is that while we know what is going on that galaxy, it is only a single galaxy, and so we don't have a global picture of accretion history. Also, with a single galaxy, we might be losing the influence of the push and pull of cosmic structure on the evolution of galaxies.

And the telling thing is you seem to get different results in the two scenarios. Which is "correct"?

The situation is even more complex, because how do you define when something has merged? This might sound like a silly question, but when you run a computer simulation of galaxies forming, you run through lots of time steps, but you can only write out a limited number of "snapshots", so unlike the movie above, what you actually have is a series of still photographs, and it is from these that you have to decided whether something has merged.

And it turns out that the definition of a merger is tricky. You need to decide on criteria, and, with all good criteria, there are events that break the rules. In fact, you can get objects which *look* like they have merged, but at a later snapshot they have separated and what you realise is that this system was actually just a fly-by rather than a merger.

So, Tom delved into all of this with some new simulations with lots of snapshot. In brief, the result is that the relation derived from cosmologically motivated simulations are the ones which more accurately describe the growth of galaxies, and you really need to unpick mergers and be careful on your definitions.

At the end of the day, you can make a accurate merger-tree, which shows you how the halo of a galaxy grows. Here's one from the paper 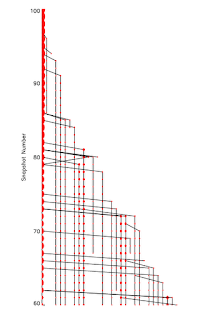 but I'll let you read the paper to get all the gory details. Well done Tom!


The Lives of High Redshift Mergers


We present a comparative study of recent works on merger-timescales with dynamical friction and find a strong contrast between idealized/isolated mergers (Boylan-Kolchin et al. 2008) and mergers from a cosmological volume (Jiang et al. 2008). Our study measures the duration of mergers in a cosmological N-body simulation of dark matter, with emphasis on higher redshifts (z < 10) and a lower mass range. In our analysis we consider and compare two merger definitions; tidal disruption and coalescence. We find that the merger-time formula proposed by Jiang et al. (2008) describes our results well and conclude that cosmologically motivated merger-time formulae provide a more versatile and statistically robust approximation for practical applications such as semi-analytic/hybrid models.