January 13, 2012
For a long time, I have been a fan of David Bowie, and have seen him in concert a couple of times. In the good old days (early 1980s), when MTV showed nothing but music videos, I would happily while away the hours on Bowie (and Queen, and just about everything else).

But as everyone knows, people grow-up and have to go to university, and MTV went the way of pathetic shows rather than showing videos, and so I didn't really watch music videos any more.

While holidaying last week, we happened to be chilling, and decided to watch a bit of Rage as they were showing a series of Bowie videos, and while watching Let's Dance, I had a "ehh - that's familiar" kind of moment. It was driven by this image

a sight what will be familiar to astronomers the world over. No, not the people in the foreground, or the nuclear explosion in the background, but the mountains!

Why? Because they are the mighty Warrumbungles, mountains in Northern(ish) New South Wales, near the town of Coonabarabran. Why would these mountains be familiar to astronomers? Well, Siding Spring Observatory, home of the Anglo-Australian Telescope (the largest optical telescope in Australia, a world-beater in surveys of the heavens, and where I used to work), overlooks the park.

The thing that caught my eye is not just that these are the Warrumbungles, but the mountains look virtually the same as seen from the catwalk of the telescope, or the look-out point at the edge of the observatory.

Here's a view from the base of the AAT

(the red thing is the case that the 3.9m mirror was carried to the observatory in), and here's another view

So, I got a little excited! What if David Bowie had visited Siding Springs (and the AAT); I know it's not really a lot to get excited about, but at least it was something to think about.

My hopes were a little dashed after a little detective work. The clip in the video was not filmed on Siding Spring mountain, but actually White Gum Lookout in the National Park.

But why are the views so similar. This map explains it all 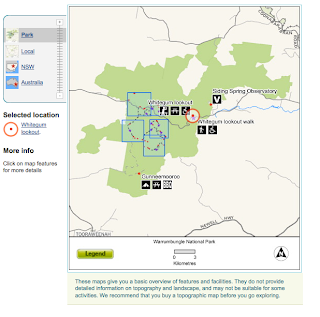 The look out basically sits on the line joining Siding Spring Observatory and the lovely peaks of the Warrumbungles. Apparently Bowie visiting Coonabarabran in the early 1980s was big news at the time (but the person who told me this kept well away). Ah well, even if he didn't visit the AAT, David Bowie must have driven close by :)