Postdoctoral researcher, Edouard J. Bernard, working with Annette Ferguson at Edinburgh's Institute for Astronomy, and myself, has had his paper on the star formation history in a couple of fields observed with the Hubble Space Telescope. Before continuing, I want to say that the IfA has the best, thickest custard in the entire world! 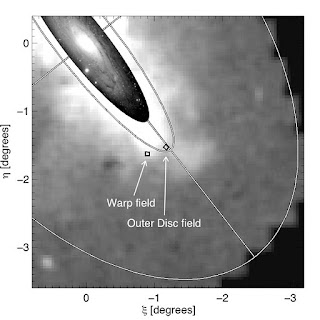 The grey area is the sky that we've observed as part of the PAndAS program with Canada-France-Hawaii Telescope, whereas the tiny squares are the bit covered by Hubble; all telescope time is quite competitive, but getting lots of Hubble time is difficult (although the PHAT team is getting much of the disk of M31).

So, what can you do with these observations? Well, you can make a fantastic picture like this 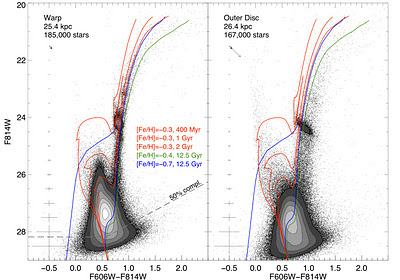 These are colour-magnitude diagrams, extremely powerful tools in astrophysics. I should note that the F606W and F814W are the filters on the Hubble Space Telescope, and these deep images get way down into the stellar populations. Here we can clearly see the Red Giant Branch (RGB) and the Red Clump. Overlaid are theoretical isochrones which allows us to unravel lots, like the star formation history of each of the regions looked at.

After a significant amount of work, you end up with pictures like this 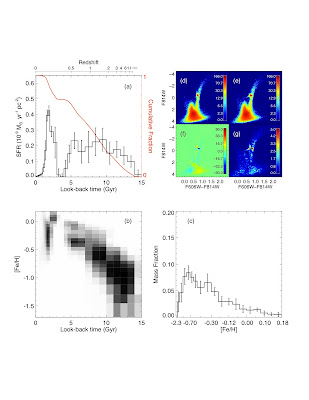 that chart the star formation history and element enrichment over time. Great stuff! What is so fantastic is that in this history we see a burst of star formation when M33 and M31 last interacted, a few billion years ago. Isn't astrophysics simply wonderful?


We present a detailed analysis of two fields located 26 kpc (~5 scalelengths) from the centre of M31. One field samples the major axis populations--the Outer Disc field--while the other is offset by ~18' and samples the Warp in the stellar disc. The CMDs based on HST/ACS imaging reach old main-sequence turn-offs (~12.5 Gyr). We apply the CMD-fitting technique to the Warp field to reconstruct the star formation history (SFH). We find that after undergoing roughly constant SF until about 4.5 Gyr ago, there was a rapid decline in activity and then a ~1.5 Gyr lull, followed by a strong burst lasting 1.5 Gyr and responsible for 25% of the total stellar mass in this field. This burst appears to be accompanied by a decline in metallicity which could be a signature of the inflow of metal-poor gas. The onset of the burst (~3 Gyr ago) corresponds to the last close passage of M31 and M33 as predicted by detailed N-body modelling, and may have been triggered by this event. We reprocess the deep M33 outer disc field data of Barker et al. (2011) in order to compare consistently-derived SFHs. This reveals a similar duration burst that is exactly coeval with that seen in the M31 Warp field, lending further support to the interaction hypothesis. The complex SFHs and the smoothly-varying age-metallicity relations suggest that the stellar populations observed in the far outer discs of both galaxies have largely formed in situ rather than migrated from smaller galactocentric radii. The strong differential reddening affecting the CMD of the Outer Disc field prevents derivation of the SFH. Instead, we quantify this reddening and find that the fine-scale distribution of dust precisely follows that of the HI gas. This indicates that the outer HI disc of M31 contains a substantial amount of dust and therefore suggests significant metal enrichment in these parts, consistent with inferences from our CMD analysis.