November 27, 2011
I've been interested in chaos since reading Gleick's book back in the 1980s. I was first introduced to fractals when I was a summer student at the Rutherford Labs in the late 1980s; this was when colour printers were rare and expensive and I spent a lot of time convincing the guardian of the printer that printing out large colour fractals for my bedroom wall was essential for my studies of proton-anti-proton scattering.

But that's another story.

A little while ago, I caught an excellent documentary called "The Secret Life of Chaos" by the equally excellent presenter, Jim Al-Khalili. This linked a lot of topics, including chaos and complex systems, which is when a group of things following simple rules results in complicated (and sometimes difficult to predict) behaviour.

in some of the earliest work in the field. I'm sure a number of you recognise him as Alan Turing. I first came across him in his work on cracking the Enigma code in World War II, and then discovered his founding work on modern computing.

But it turns out that in 1952 (and this is what I learnt from the Chaos doco), he published this paper 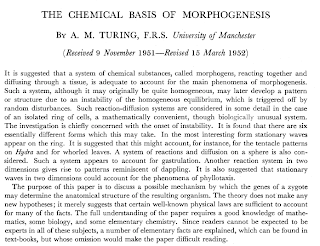 and it's an amazing look by a mathematician into the world of biology. I am not an expert in this area, or a historian of science, but I know of Schrodinger's attempt to talk about information in genes in his book What is Life?; Schrodinger was wrong in many aspects, but I like the fact that he was thinking about these questions.

Turing's paper addresses a very interesting question, namely how does a complex being like a human, arise from a pretty uniform and symmetric sack of cells soon after conception. How do cells know to become liver, heart, nerve and skin cells? What triggers the process?

My reading of Turing's paper (and I need to read it in more depth) is that the feeling of the day was that any inhomogeneities in the sack of cells would diffuse out, and the sack would remain essentially featureless. What Turing did, however, was to create a mathematical model for such a sack. It was not intended to be strictly biological, and much of the paper discusses an unrealistic ring of cells, but the fact that he could write down equations means he could start to predict what happens to the cells.

His basic model was that the local chemistry decides what a cell will do, and chemical can diffuse through the ring, from higher to lower concentration. So far, so standard, as you would expect the net chemistry of the sack of cells to be effectively uniform.

But then the stroke of genius. Get the chemicals to interact with one another, and get the reaction rates to depend on the amount of chemical locally. What happens? As noted by Turing, things do not just settle down to a uniform, but you get waves and pulses of chemicals moving through the cells.

This is taken from Turing's paper

which is the 2D distribution of chemicals in one of his simple models. As pointed out, this patten doesn't look too different to 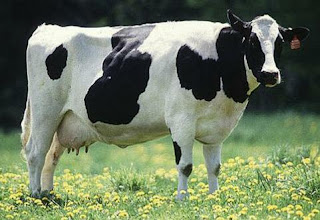 and perhaps cows patterns, or that of a leopard, zebra or my old Jack Russell, are simply the indication of the chemical mathematics in the skin of the forming animal.

Anyway, it was pouring with rain yesterday morning, and so I thought I would try and make a simple Turing model. I decided to make a ball of cells, laying them out using HealPIX to put them on a sphere (this means each cell occupies the same area and so I don't have to worry about correcting for that). I chose three chemicals (let's call them Red, Green and Blue) and allowed each cell to have effectively the same amount at the start, except for a few overdoped cells.

After this, I allowed diffusion between nearest neighbour cells, and also put in interaction terms at each point, depending on the amount of chemical in that cell. Of course, this is just a simple set of differential equations, which takes little time to code up in MatLab.

Without the interaction terms, the ball of cells becomes a uniform bland colour, but once we have the interaction terms turned on, cool things start to happen. I actually dumped the output of MatLab into a rendering format (PovRay, fiendishly difficult - but free) and make some pictures. So, this is just one output, 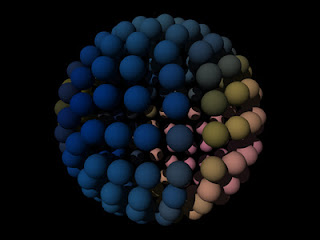 Pictures are nice, but we want to see some action. So, here's a couple of movies I made
I must admit that I cheated slightly and used the Lorenz equations to ensure I got chaotic behaviour, but with the diffusion terms as well we get to see the chemical signatures pulsing through the cells. Well, I like it.

Now, some might say "why bother?" To you, my monomath cousins, I say that the answer is that it is interesting and continues to teaching me things beyond my area of expertise, and new skills that I might need to use one day. Anyway, there are worse ways to spend a rainy Saturday morning :)