Faster than the speed of light

After a weekend of great rugby (from the Welsh, the English and Australians were rather blah), I have responded to a good question posted over at The Conversation on distances in the Universe. It's a question that gets raised quite a bit and basically put it goes something like


If the Universe began 13.7 billion years ago, when the distance between any pair of points was zero, how can anything be more than 13.7 billion light years away?

The answer is the difference between local motions and global motions. Here's the response I posted 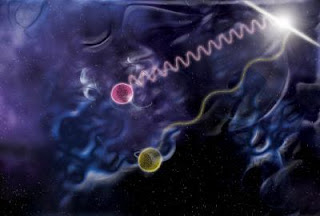 An excellent question, and one which may not make sense to start with. We know from special relativity, nothing can travel faster than light (recent neutrino claims excepted). But in reality, special relativity says that nothing can go faster than the speed of light **locally**, so in a small box, if I try and race an electron and a photon across the box, the photon will win.

This is a very important point. It seems that everyone takes the statement from special relativity, namely that you can't travel fast than light, and then tries to apply it into a global picture. But that is not correct.

But there is no simple way to compare a patch here to a patch there, and talking about how fast something is moving "over there" really does not have a unique answer in relativity. It depends on the coordinates you choose to us (and if something depends on coordinates, it ain't physically observable). 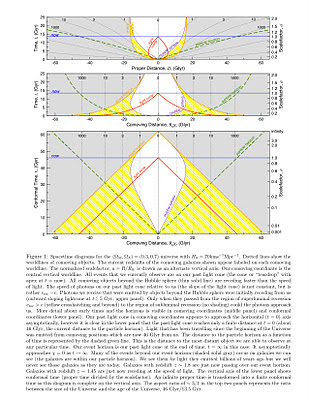 It's actually messier than that. I can chose to mix up time and space into new coordinates, and this demonstrates that superluminal verses subluminal motions get even more confusing. But I won't write about it here, but let you have some reading.


A straight-forward interpretation of standard Friedmann-Lemaitre-Robertson-Walker (FLRW) cosmologies is that objects move apart due to the expansion of space, and that sufficiently distant galaxies must be receding at velocities exceeding the speed of light. Recently, however, it has been suggested that a simple transformation into conformal coordinates can remove superluminal recession velocities, and hence the concept of the expansion of space should be abandoned. This work demonstrates that such conformal transformations do not eliminate superluminal recession velocities for open or flat matter-only FRLW cosmologies, and all possess superluminal expansion. Hence, the attack on the concept of the expansion of space based on this is poorly founded. This work concludes by emphasizing that the expansion of space is perfectly valid in the general relativistic framework, however, asking the question of whether space really expands is a futile exercise.