June 18, 2011
It's been a very productive week, and so I am going to take a little time to write up some Zombie Apocalypse code. As I noted previously, this is based on a earlier piece of work, but I am going to extend the model (and modify it to more accurately match zombies in movies).

The start point is the variables we will be following. These are H, the health humans, I, those bitten by a zombie and so on their way to zombiedom, Z, the star of the show, and D, the well and truly, non-zombie, dead.

Unlike the previous work by Robert Smith?, I don't assume hat any olf dead are revived. Rather, those that are bitten become infected, die and become zombies. Other dead remain dead, and as we know, a knock to the head moves a zombie into the permanently dead camp.

So, my starting dynamics equations are;

Where the ' are derivatives with respect to time. The H Z term is the number of Healthy and Zombies multiplied together. This is a measure of the number of interactions between the two populations. 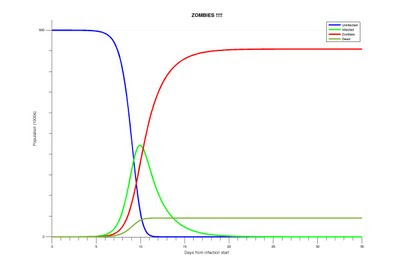 Excellent. We have about a week where nothing really happens (the zombie population is growing very slowly), and then BAM!, the population of healthy humans crashes in a week as the number of inflected rapidly rises and them decays away as zombies grow in strength.

This is exactly what we should expect to happen. Everything is flowing out of H and into Z and D, and no matter how we muck about with the parameters (other than having no zombies, or no harm in interacting with them), this is going to be the outcome.

What's next? Well, there are two possibilities: we can see if we can find a cure to stop those who are infected becoming zombies (and this may include a severe case of lead poisoning), and having a population of healthy humans who are good at protecting themselves from zombies.