Time to fight back!

June 19, 2011
Oh no!! There was a zombie outbreak in Leicester and it was clear that the city council was completely unprepared. Maybe they had not mathematically modeled the outbreak!!

Let's take the next step in the modeling and add a fight back factor. This means that there is a chance that, during a Healthy-Zombie interactions, the Zombies themselves can be truly killed and moved into the Dead population.

where we now have a new parameter, δ, which controls the probability of killing Zombies.

OK, some runs. Let's try δ=0.003. This means that there is still a good chance of being bitten and becoming inflected, but you have a better chance of killing a Zombie than a Zombie killing you. What you get is 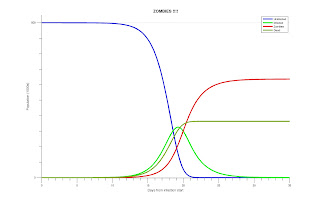 This is quite interesting. Clearly, the timescale for things to happen has been extended; it now takes a couple of weeks until the Zombies take over, but the population of Healthy humans still crashes very quickly.

OK - one more test (as breakfast is ready), but let's try δ=0.009, so there is almost as much chance of you killing a Zombie as you getting bitten. What happens now? 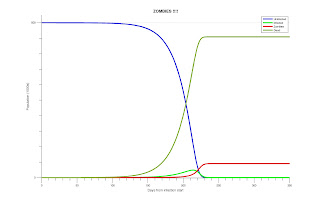 Notice that the timescale is much longer now, and we have half-a-year where things are OK, but the outcome is the same; the population of Health humans crashes and Zombies take over, but with a lot fewer Zombies in the end.

Right, that's enough for now. Next we will consider hardening of the population, where people become better at killing Zombies and avoiding infection. Then we will add a cure. but that's next.
Numerical Methods Zombies