May 20, 2017
So, my plans for my blog through 2017 have not quite gone to plan, but things have been horrendously busy, and it seems like the rest of the year is likely to continue this way.

But I did get a chance to do some recreational mathematics, spurred on my a story in the news. It's to do with a problem presented at the 2017 Raytheon MATHCOUNTS® National Competition and reported in the New York Times. Here's the question as presented in the press:

Kudos to 13 year old Texan, Luke Robitialle, who got this right.

With a little thought, you should be able to realise that the answer is 25. For any particular chick, there are four potential out comes, each with equal probability. Either the chick is

Only one of these options results in the chick being unpecked, and so the expected number of chicks unpecked in a circle of 100 is one quarter of this number, or 25.

But it's the kind of maths that makes me ask more questions.

I tried to find an analytic solution, but my brain is old, and so I resorted to good old numerical methods. Generate lots of experiments on a computer, and see what the outcomes look like. But there is an issue that we have to think about, namely the question of how many different configurations of chicks pecking left and right can have?

That's a lot of possibilities! How are we going to sample these?

Well, if we treat a 0 as "chick pecks to the left", and 1 as "check pecks to the right", then if we choose a random integer between 0 and 2100-1,  and represent it as a binary number, then that will be a random sampling of the pecking order (pecking order, get it!) As an example, all chicks peck to the left would be 100 0s in binary, where as all the chicks peck to the right would be 100 1s in binary. 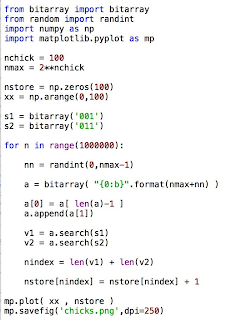 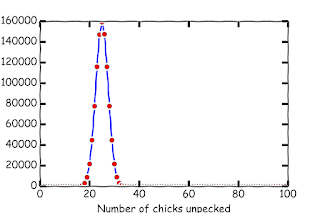 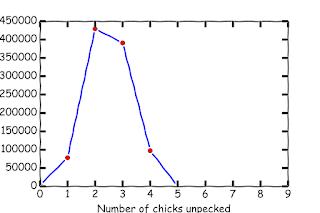 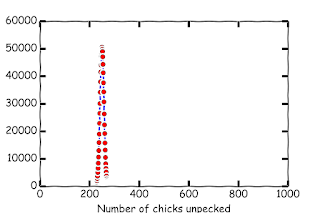 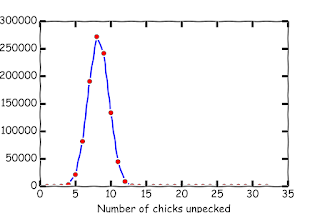