How Far Can We Go? A long way, but not not that far!

May 15, 2016
Obligatory "sorry it's been a long time since I posted" comment. Life, grants, student, etc All of the usual excuses! But I plan (i.e. hope) to do more writing here in the future.

But what's the reason for today's post? Namely this video posted on your tube.
The conclusion is that humans are destined to explore the Local Group of galaxies, and that is it. And this video has received a bit of circulation on the inter-webs, promoted by a few sciency people.

The problem, however, is that it is wrong. The basic idea is that accelerating expansion due to the presence of dark energy means that the separation of objects will get faster and fast, and so it will be a little like chasing after a bus; the distance between the two of you will continue to get bigger and bigger. This part is correct, and in the very distant universe, there will be extremely isolated bunches of galaxies whose own gravitational pull overcomes the cosmic expansion. But the rest, just how much we can explore is wrong.

Why? Because they seem to have forgotten something key. Once we are out there traveling in the "expanding universe" then the expansion works in our advantage, increasing the distance not only between us and where we want to get to, but also between us and home. We effectively "ride" expansion.

So, how far could we get? Well, time to call (again - sorry) Tamara Davis's excellent cosmological work, in particular this paper on misconceptions about the Big Bang. I've spoken about this paper many times (and read it, it is quite excellent) but for this post, what we need to look is at the "conformal" picture of our universe. I don't have time togo into the details here, but the key thing is that you manipulate space and time so light rays trade at 45 degrees in the picture. Here's our universe.

The entire (infinite!) history of the universe is in this picture, mapped onto "conformal time". We're in the middle on the line marked now. If we extend our past light cone into the future, we can see the volume of the universe acceptable to us, given the continued accelerating expansion. We can see that encompasses objects that are currently not far from 20 billion light years away from us. This means that light rays fired out today will get this far, much, much larger than the Local Group of galaxies.

But ha! you scoff, that's a light ray. Puny humans in rockets have no chance!

Again, wrong, as you need to care about relativity again. How do I know? I wrote a paper about this with two smart students, Juliana Kwan (who is now at the University of Pennsylvania)  and Berian James, at Square. The point is that if you accelerate off into the universe, even at a nice gentle acceleration similar to what we experience here on Earth, you still get to explore much of the universe accessible to light rays. 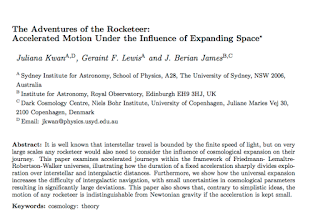 The key point is not just about how far you want to get, but whether or not you want to get home again. I am more than happy to acknowledge Jeremy Heyl's earlier work that inspired ours.

One tiny last point is the question whether our (or maybe not our) decedents will realise that there is dark energy in the universe. Locked away in Milkomenda (how I hate that name)  the view of the dark universe in the future might lead you to conclude that there is no more to the universe than ourselves, and it would appear static and unchanging, but anything thrown "out there", such as rocket ships (as per above) or high velocity stars, would still reveal the presence of dark energy.