December 13, 2015
First, the usual apologies! It's been an age since I have written here, but, as you know, the life of the academic is a busy one! Especially since I have just completed a book which is to be published next year. More on that journey later, but today a little post about academic toolkits.

This is something that I have written about before, and I know some of my colleagues and peers disagree with me, but that's fine as I think it illustrates that there is no single recipe for success in academia (Am I a success in academia? That's for others to judge, but I am still here after twenty years :).

What makes a "good" academic? In modern academia, we have to be specialists, focused on a generally tiny part of the immense enterprise called science. When ever I realise this, Kenneth Williams springs immediately to mind
Crossing boundaries and commenting on other areas of science that are not in your domain is met with suspicion and attack, and it's not just new ideas about cancer, but if I tried to say something deep and meaningful about, say asteroseismology, I would be met with suspicion. Part of the reason is that people would not believe that I could have absorbed the vast amount of knowledge and information that is needed to be an expert in this relatively narrow area.

But I like to try and remain as broad as possible. I have observed with optical and infrared telescopes, counting stars, taking spectra, identifying galaxies and quasars. I can do a bit of maths, and can work with the cosmological equations and general relativity. I love coding, and data modelling, and can run code on supercomputers. And I try to publish in a broad range of areas, not being too dependent upon the next telescope allocation or insight into galaxy dynamics.

To achieve this, I've had to learn a lot (like every academic does) but I have tried to keep this knowledge broad. So, as well as the tools that I need in particular areas, I have tried to learn as much as possible across a range of topics. And this means learning tips and techniques that might seem, at the time, not to have direct relevance to my research.

A little while ago I organised a session on programming GPUs at my department. There was good attendance, but I spoke to one student who decided not to attend. Their response was "When will I need to know that?" and I must admit I was disheartened. You may never need it, or it might suddenly present itself to a tricky question, or it might even be part of the selection of a possible job coming up. You just don't know!

To the case in point. Roughly two decades ago, I started playing with povray, a raytracing code for producing photo-realistic images. It's very powerful, but has a very pernickety coding language. Over the years, I have scraped up enough knowledge to be a reasonable amateur, picking up the mantle and running a little whenever I had time. But when would it be useful to me.

Well, as I mentioned at the start, I have just had a book accepted for publication (with Luke Barnes over at LettersToNature) and we needed to think of a cover design. The book is on cosmological fine-tuning and we umm'd and ahhh'd about standard astronomical images, but decided that would be just like other books out there. So we wanted to try something different, something novel. And we turned to povray. I won't go into the in's and out's, but a week or so of discussion and debate, we had a winner. 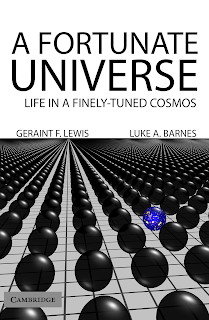 This isn't quite the finished version as someone with serious graphic design experience is going to do the text, but we made the image, and we like it :)

It wasn't too tricky a job, but a lot of trial and error, but the fact we had some povray experience meant that there was not a huge hurdle to overcome.

So, my advice to budding academics is that you should think about developing their academic toolkits, to try and build an expansive range of skills beyond the narrow range of tools you use in your day-to-day research. It will not guarantee a path to academic success, but you may never know when they will save the day.