Sailing under the Magellanic Clouds: A DECam View of the Carina Dwarf

Where did that month go? Winter is almost over and spring will be breaking, and my backlog of papers to comment on is getting longer and longer.

So a quick post this morning on a recent cool paper by PhD student, Brendan McMonigal, called "Sailing under the Magellanic Clouds: A DECAm View of the Carina Dwarf". The title tells a lot of the story, but it all starts with a telescope with a big camera.

The camera is DECam, the Dark Energy Camera located on the 4m CTIO telescope in Chile. This is what it looks like;

It's not one CCD, but loads of them butted together allowing us to image a large chunk of sky. Over the next few years, this amazing camera will allow the Dark Energy Survey which will hopefully reveal what is going on in the dark sector of the Universe, a place where Australia will play a key-role through OzDES.

But one of the cool things is that we can use this superb facility to look at other things, and this is precisely what Bendan did. And the target was the Carina Dwarf Galaxy. Want to see this impressive beast! Here it is; See it? It is there, but it's a dwarf galaxy, and is so quite faint. Still can't see it? Bring on DECam. We pointed DECam at Carina and took a picture. Well, a few. What did we see? 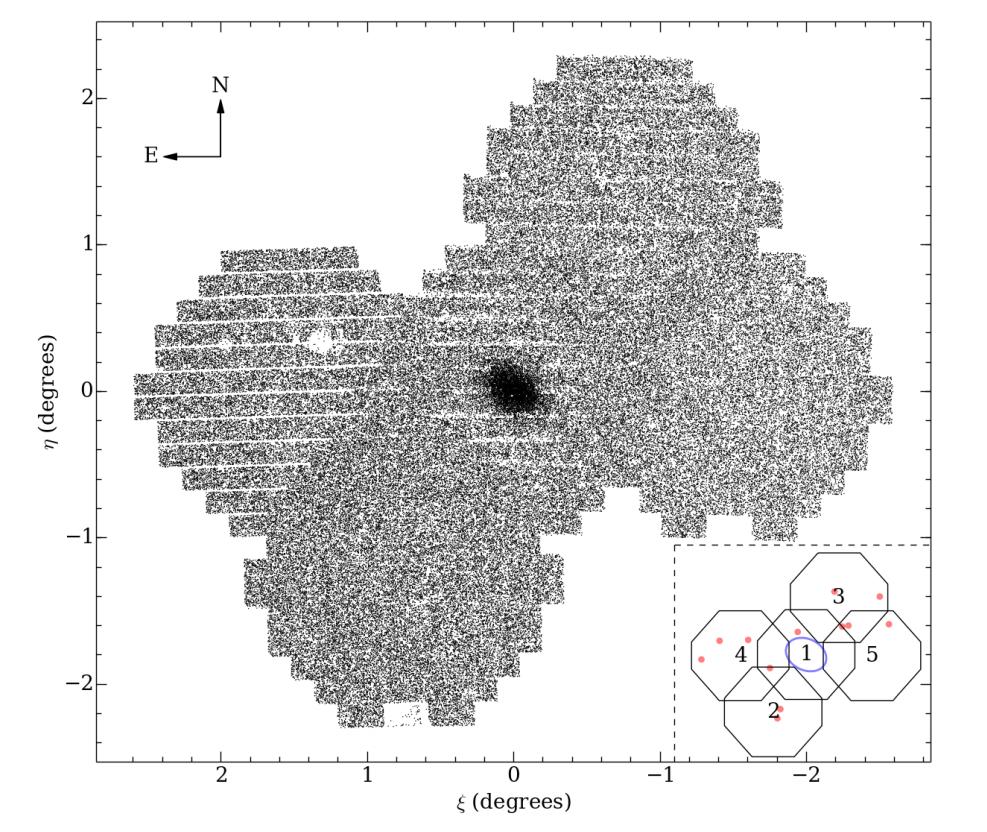 So, as you can see, we took 5 fields (in two colours) centred on the Carina dwarf. And with the superb properties of the camera, the dwarf galaxy nicely pops out.

But science is not simply about taking pictures, so we constructed colour-magnitude diagrams for each of the fields. Here's what we see (and thanks Brendan for constructing the handy key for the features in the bottom-right corner). 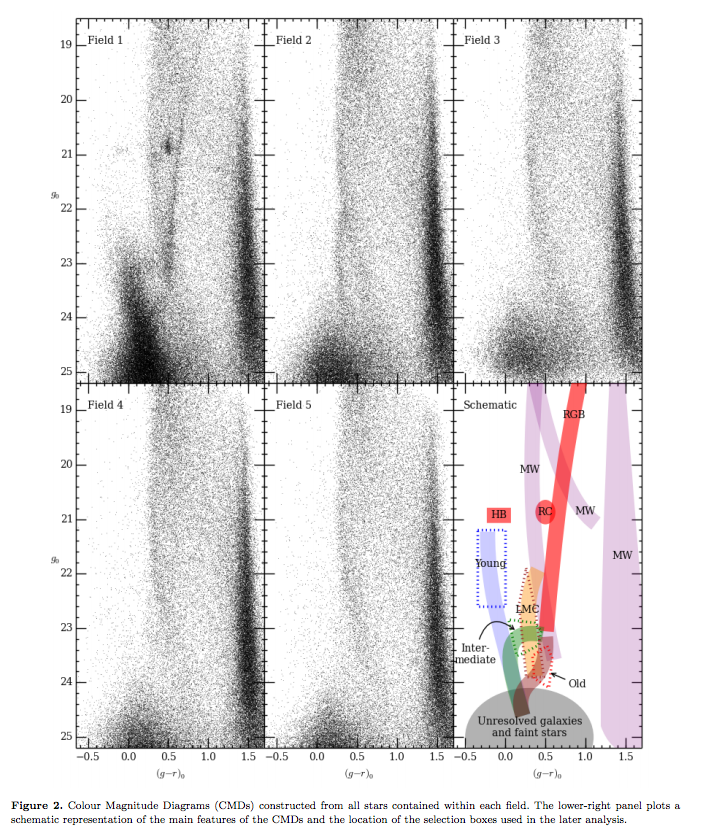 All that stuff in the labelled MW are stars in our own Milky Way, which is blooming contamination getting in our way. The blob at the bottom is where the we are hitting the observational limits of the camera, and can't really tell faint stars from galaxies.

The other bits labelled Young, Intermediate and Old tell us that Carina has had several bursts of star-formation during its life, some recent, some a little while ago, and some long ago (to express it in scientific terms), while the RGB is the Red Giant Branch, RC is the Red Clump and HB is the Horizontal Branch.

We can make maps of each of the Young, Intermediate and Old population stars, and what we see is this; 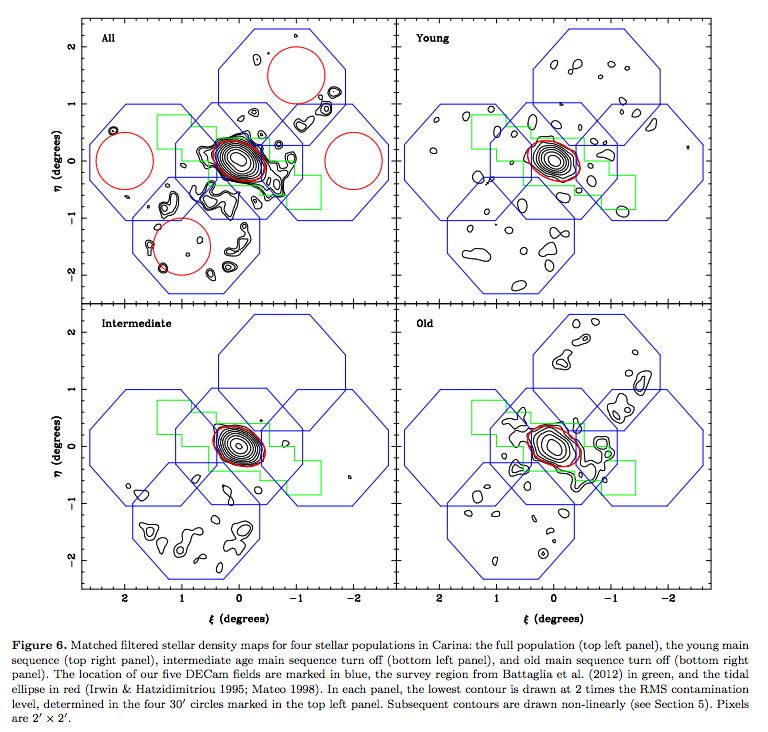 The Young and Intermediate appear to be quite elliptical and smooth, but the Old population appears to be a little ragged. This suggests that long ago, Carina has been shaken up through some gravitational shocks when it interacted with the larger galaxies of the Local Group, but the dynamics of these interactions are poorly understood.

But there is more. Look back up there at the Colour-Magnitude Diagram schematic and there is a little yellow wedge labelled LMC, the Large Magellanic Cloud; what's that doing there?

What do we see if we look at just those stars? Here's what we see. 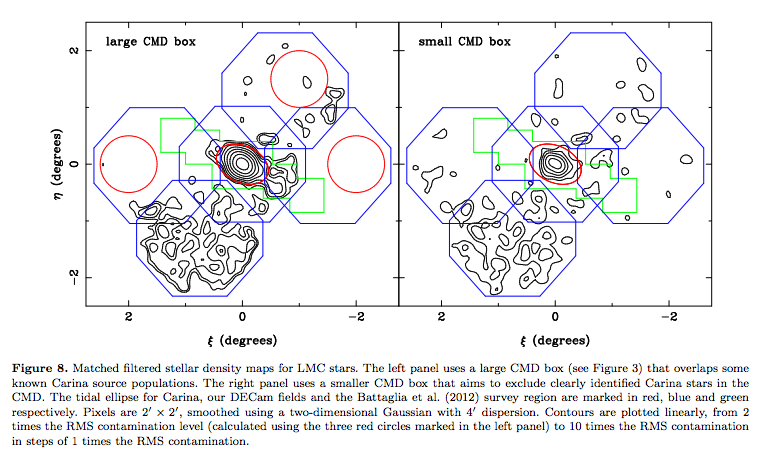 So, they are not all over the place, but are located only in the southern field, overlapping with Carina itself (and making it difficult to separate the Old Carina population from the Magellanic Cloud stars).

But still, what are they doing there? Here's a rough map of the nearby galaxies.

As we can see, from the view inside the Milky Way, Carina and the LMC appear (very roughly) in the same patch of sky but are completely different distances. But it means that the Large Magellanic Cloud must have a large halo of stars surrounding it, possibly puffed up through interactions with the Small Magellanic Cloud as they orbit together, and with the mutual interaction with the Milky Way.

It's a mess, a glorious, horrendous, dynamically complicated mess. Wonderful!

Sailing under the Magellanic Clouds: A DECam View of the Carina Dwarf

We present deep optical photometry from the DECam imager on the 4m Blanco telescope of over 12 deg[Math Processing Error] around the Carina dwarf spheroidal, with complete coverage out to 1 degree and partial coverage extending out to 2.6 degrees. Using a Poisson-based matched filter analysis to identify stars from each of the three main stellar populations, old, intermediate, and young, we confirm the previously identified radial age gradient, distance, tidal radius, stellar radial profiles, relative stellar population sizes, ellipticity, and position angle. We find an angular offset between the three main elliptical populations of Carina, and find only tentative evidence for tidal debris, suggesting that past tidal interactions could not have significantly influenced the Carina dwarf. We detect stars in the vicinity of, but distinct to, the Carina dwarf, and measure their distance to be 46[Math Processing Error]2 kpc. We determine this population to be part of the halo of the Large Magellanic Cloud at an angular radius of over 20 degrees. Due to overlap in colour-magnitude space with Magellanic stars, previously detected tidal features in the old population of Carina are likely weaker than previously thought.