Resolving the mass--anisotropy degeneracy of the spherically symmetric Jeans equation

July 19, 2014
I am exhausted after a month of travel, but am now back in a sunny, but cool, Sydney. It's feels especially chilly as part of my trip included Death Valley, where the temperatures were pushing 50 degrees C.

I face a couple of weeks of catch-up, especially with regards to some blog posts on my recent papers. Here, I am going to cheat and present two papers at once. Both papers are by soon-to-be-newly-minted Doctor, Foivos Diakogiannis. I hope you won't mind, as these papers are Part I and II of the same piece of work.

The fact that this work is spread over two papers tells you that it's a long and winding saga, but it's cool stuff as it does something that can really advance science - take an idea from one area and use it somewhere else.

The question the paper looks at sounds, on the face of it, rather simple. Imagine you you have a ball of stars, something like this, a globular cluster:

You can see where the stars are. Imagine that you can also measure the speeds of the stars. So, the questions is - what is the distribution of mass in this ball of stars? It might sound obvious, because isn't the mass the stars? Well, you have to be careful as we are seeing the brightest stars, and the fainter stars, are harder to see. Also, there may be dark matter in there.

So, we are faced with a dynamics problem, which means we want to find the forces; the force acting here is, of course, gravity, and so mapping the forces gives you the mass. And forces produces accelerations, so all we need is to measure these and... oh.. hang on. The Doppler Shift gives us the velocity, not the acceleration, and so we have wait (a long time) to measure accelerations (i.e. see the change of velocity over time). As they say in the old country, "Bottom".

And this has dogged astronomy for more than one hundred years. But there are some equations (which I think a lovely, but if you are not a maths fan, they may give you a minor nightmare) called the Jeans Equations. I won't pop them here, as there are lots of bits to them and it would take a blog post to explain them in detail.

But there are problems (aren't there always) and that's the assumptions that are made, and the key problem is degeneracies.

Degeneracies are a serious pain in science. Imagine you have measured a value in an experiment, let's say it's the speed of a planet (there will be an error associated with that measurement). Now, you have your mathematical laws that makes a prediction for the speed of the planet, but you find that your maths do not give you a single answer, but multiple answers that equally well explain the measurements. What's the right answer? You need some new (or better) observations to "break the degeneracies".

And degeneracies dog dynamical work. There is a traditional approach to modelling the mass distribution through the Jeans equations, where certain assumptions are made, but you are often worried about how justified your assumptions are. While we cannot remove all the degeneracies, we can try and reduce their impact. How? By letting the data point the way.

By this point, you may look a little like this

OK. So, there are parts to the Jeans equations where people traditionally put in functions to describe what something is doing. As an example, we might choose a density that has a mathematical form like

that tells us how the density change with radius (those in the know will recognise this as the well-known Navarro-Frenk-White profile. Now, what if your density doesn't look like this? Then you are going to get the wrong answers because you assumed it.

So, what you want to do is let the data choose the function for you. But how is this possible? How do you get "data" to pick the mathematical form for something like density? This is where Foivos had incredible insight and called on a completely different topic all together, namely Computer-Aided Design.

For designing things on a computer, you need curves, curves that you can bend and stretch into a range of arbitrary shapes, and it would be painful to work out the mathematical form of all of the potential curves you need. So, you don't bother. You use extremely flexible curves known as splines. I've always loved splines. They are so simple, but so versatile. You specify some points, and you get a nice smooth curve. I urge you to have a look at them.

For this work, we use b-splines and construct the profiles we want from some basic curves. Here's an example from the paper: 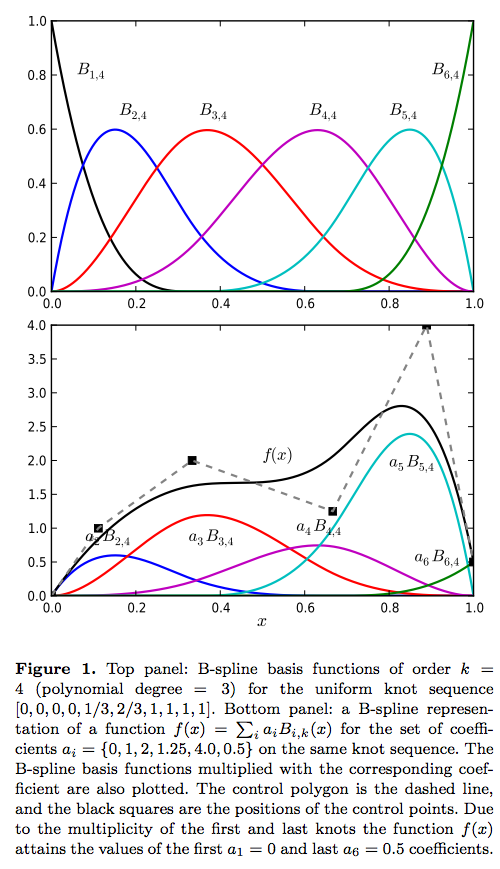 We then plug this flexible curve into the mathematics of dynamics. For this work, we test the approach by creating fake data from a model, and then try and recover the model from the data. And it works! 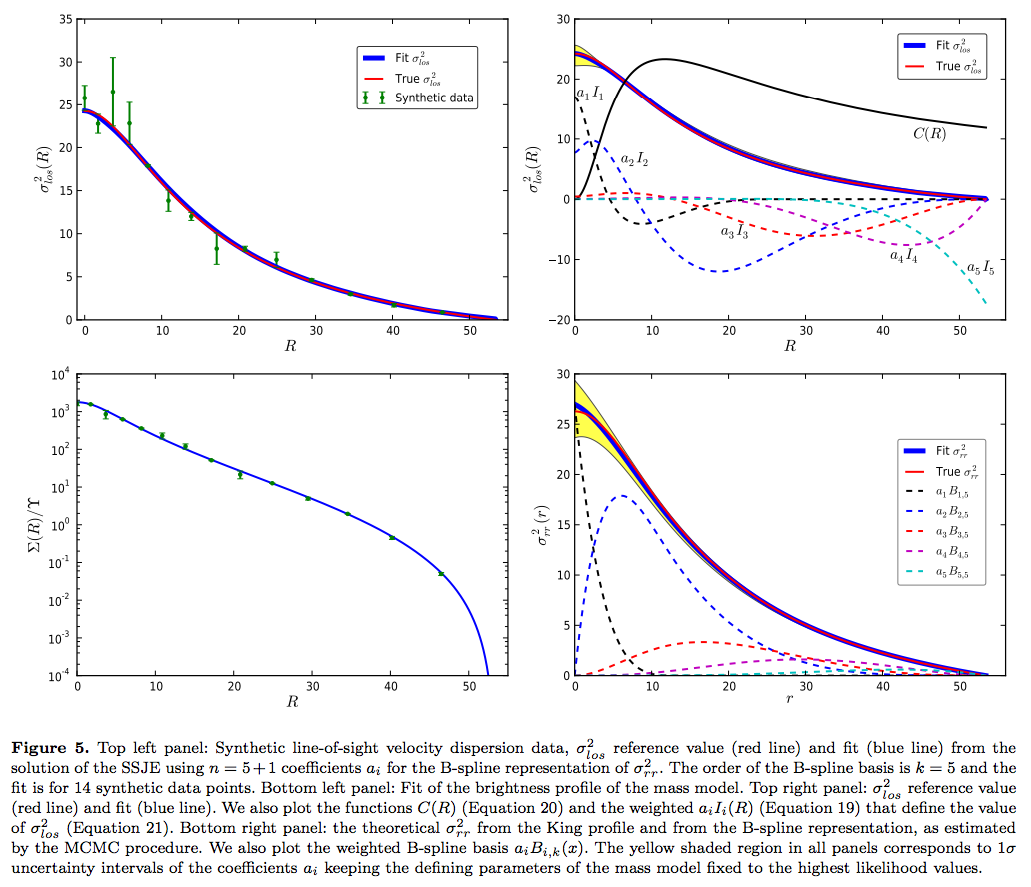 Although it is not that simple. A lot of care and thought has to be taken on just how you you construct the spline (this is the focus of the second paper), but that's now been done. We now have the mathematics we need to really crack the dynamics of globular clusters, dwarf galaxies and even our Milky Way.

There's a lot more to write on this, but we'll wait for the results to start flowing. Watch this space!

Well done Foivos! - not only on the paper, but for finishing his PhD, getting a postdoctoral position at ICRAR, but also getting married :)

Resolving the mass--anisotropy degeneracy of the spherically symmetric Jeans equation I: theoretical foundation

A widely employed method for estimating the mass of stellar systems with apparent spherical symmetry is dynamical modelling using the spherically symmetric Jeans equation. Unfortunately this approach suffers from a degeneracy between the assumed mass density and the second order velocity moments. This degeneracy can lead to significantly different predictions for the mass content of the system under investigation, and thus poses a barrier for accurate estimates of the dark matter content of astrophysical systems. In a series of papers we describe an algorithm that removes this degeneracy and allows for unbiased mass estimates of systems of constant or variable mass-to-light ratio. The present contribution sets the theoretical foundation of the method that reconstructs a unique kinematic profile for some assumed free functional form of the mass density. The essence of our method lies in using flexible B-spline functions for the representation of the radial velocity dispersion in the spherically symmetric Jeans equation. We demonstrate our algorithm through an application to synthetic data for the case of an isotropic King model with fixed mass-to-light ratio, recovering excellent fits of theoretical functions to observables and a unique solution. The mass-anisotropy degeneracy is removed to the extent that, for an assumed functional form of the potential and mass density pair (\Phi,\rho), and a given set of line-of-sight velocity dispersion \sigma_{los}^2 observables, we recover a unique profile for \sigma_{rr}^2 and \sigma_{tt}^2. Our algorithm is simple, easy to apply and provides an efficient means to reconstruct the kinematic profile.

The spherical Jeans equation is widely used to estimate the mass content of a stellar systems with apparent spherical symmetry. However, this method suffers from a degeneracy between the assumed mass density and the kinematic anisotropy profile, . In a previous work, we laid the theoretical foundations for an algorithm that combines smoothing B-splines with equations from dynamics to remove this degeneracy. Specifically, our method reconstructs a unique kinematic profile of  and  for an assumed free functional form of the potential and mass density  and given a set of observed line-of-sight velocity dispersion measurements, . In Paper I (submitted to MNRAS: MN-14-0101-MJ) we demonstrated the efficiency of our algorithm with a very simple example and we commented on the need for optimum smoothing of the B-spline representation; this is in order to avoid unphysical variational behaviour when we have large uncertainty in our data. In the current contribution we present a process of finding the optimum smoothing for a given data set by using information of the behaviour from known ideal theoretical models. Markov Chain Monte Carlo methods are used to explore the degeneracy in the dynamical modelling process. We validate our model through applications to synthetic data for systems with constant or variable mass-to-light ratio . In all cases we recover excellent fits of theoretical functions to observables and unique solutions. Our algorithm is a robust method for the removal of the mass-anisotropy degeneracy of the spherically symmetric Jeans equation for an assumed functional form of the mass density.