April 13, 2014
We've had a pretty cool paper accepted for publication in the Monthly Notices of the Royal Astronomical Society  which tackles a big question in astronomy, namely what is the temperature of dark matter. Huh, you might say "temperature", what do you mean by "temperature"? I will explain.

The paper is by Hareth Mahdi, a PhD student at the Sydney Institute for Astronomy. Hareth's expertise is in gravitational lensing, using the huge amounts of mass in galaxy clusters to magnify the view of the distant Universe. Gravitational lenses are amongst the most beautiful things in all of astronomy. For example: Working out how strong the lensing effect is reveals the amount of mass in the cluster, showing that there is a lot of dark matter present.

Hareth's focus is not "real" clusters, but clusters in "synthetic" universes, universes we generate inside supercomputers. The synthetic universes look as nice as the real ones; here's one someone made earlier (than you Blue Peter). 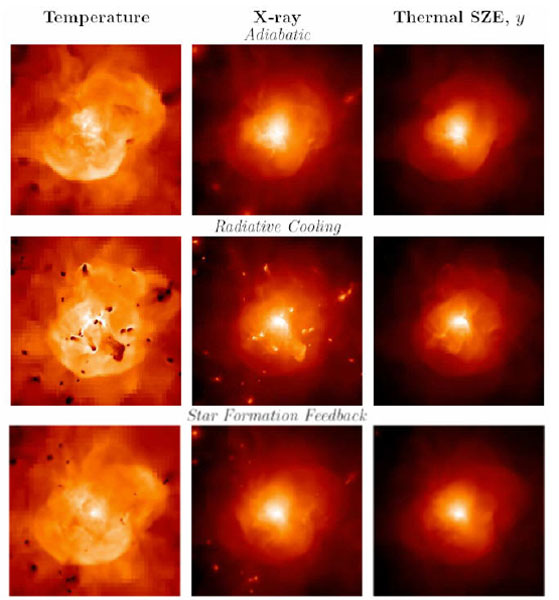 Of course, in a synthetic universe, we control everything, such as the laws of physics and the nature of dark matter.

What's the effect of changing the temperature of dark matter? Here's an illustration

With cold at the top, warmer in the middle, and hottest at the bottom. And what you can see is that as we wind up the temperature, the small scale structure in the cluster gets washed out. Some think that warm dark matter might be the solution to missing satellite problem.

Hareth's had two samples of clusters, some from cold dark matter universes and some from warm, and he calculated the strength of gravitational lensing in both. The goal is to see if changing to warm dark matter can help fix another problem in astronomy, namely that the clusters we observe seem to be more efficient at producing lensed images than the ones we have in our simulated universes.

We can get some pictures of the lensing strengths of these clusters, which looks like this 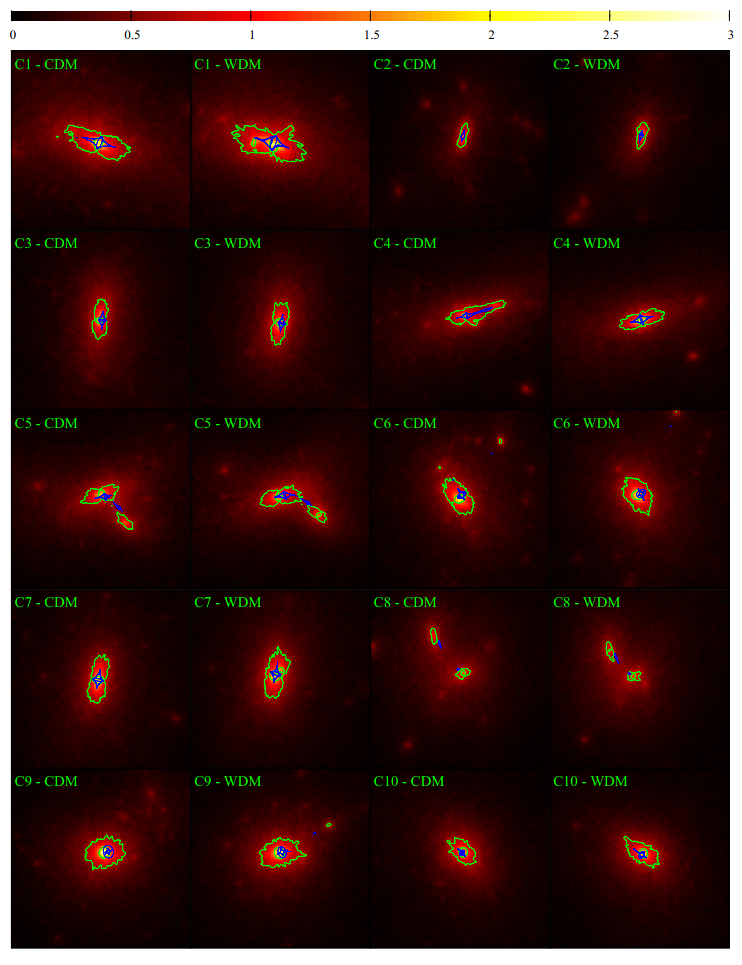 You can already see that there are some differences, but what about lensing efficiency? There are a few ways to characterise this, but one way is the cross-section to lensing. When we compare the two cosmologies, we get the following: 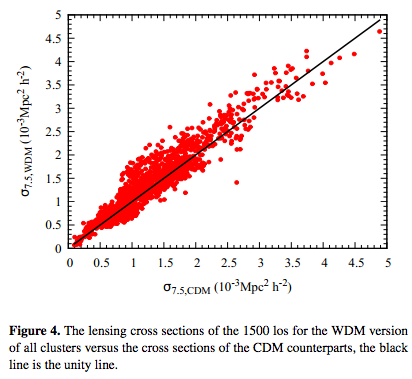 This is actually an unexpected result. Naively, we would expect warm dark matter to remove structure and make clusters puffy, and hence less efficient at lensing. So what is happening?

It took a bit of detective work, but we tracked it down. Yes, in warm dark matter clusters, the small scale structure is wiped out, but where does the mass go? It actually goes in to the larger mass halo, making them more efficient at lensing. Slightly bizarre, but it does mean that we have a way, if we can measure enough real clusters, it could give us a test of the temperature of dark matter!

But alas, even though the efficiency is stronger with warm dark matter, it is not strong enough to fix the lensing efficiency problem. As ever, there is more work to do, and I'll report it here.

Until then, well done Hareth!

The nature of the dark sector of the Universe remains one of the outstanding problems in modern cosmology, with the search for new observational probes guiding the development of the next generation of observational facilities. Clues come from tension between the predictions from {\Lambda}CDM and observations of gravitationally lensed galaxies. Previous studies showed that galaxy clusters in the {\Lambda}CDM are not strong enough to reproduce the observed number of lensed arcs. This work aims to constrain the warm dark matter cosmologies by means of the lensing efficiency of galaxy clusters drawn from these alternative models. The lensing characteristics of two samples of simulated clusters in the warm dark matter ({\Lambda}WDM) and cold dark matter ({\Lambda}CDM) cosmologies have been studied. The results show that even though the CDM clusters are more centrally concentrated and contain more substructures, the WDM clusters have slightly higher lensing efficiency than their CDM counterparts. The key difference is that WDM clusters have more extended and more massive subhaloes than CDM analogues. These massive substructures significantly stretch the critical lines and caustics and hence they boost the lensing efficiency of the host halo. Despite the increase in the lensing efficiency due to the contribution of massive substructures in the WDM clusters, this is not enough to resolve the arc statistics problem.