Can we see objects moving faster than the speed of light?

February 05, 2014
I'm a big fan of Derek Muller's youtube channel Veritasium. It discusses lots of cool scientific topics, and presents a deep understanding of the underlying physics in a fun and entertaining manner. His most recent video asks the question "Will this go faster than light?", looking at ways of failing to break the Universal Speed Limit.

Right at the end, Derek discusses the speed of light in a cosmological context, and mentions that out in the expanding Universe, there are galaxies that are moving away from us faster than light, which he then goes onto say that we can't see because of their speed.

Is this correct? Derek is in good company, as lots of renowned physicists have made similar comments; here's Richard Feynman (taken from this great article which I very much recommend if you are interested in this topic).

But alas, even the great Feynman can be wrong.

Want to see something moving faster than light? Here you go.

This, of course, is the Cosmic Microwave Background, and the bits and pieces that emitted the radiation which we are now receiving were moving faster than the speed of light, relative to us, when it was emitted. (In the following, it should be noted that coordinates and distances in cosmology are complicated things, and so the picture is a little messier than I let on).

It's easiest to understand this with one of my favourite pictures from Tamara Davis - it represents the expansion of the Universe in conformal coordinates, in which light-rays travel at 45 degrees.

Just to remind you, we're at the middle, and the line from the top to bottom is the complete history. In these cool coordinates, the big bang is at the bottom and the infinite future is at the top; the way the coordinates work is to pull the infinite time in the future to a finite value.

"Now" is the blue horizontal line, so here-today is where the blue line crosses the middle vertical line (this is starting to sound like the mildly mind-bending time travel of Asimov's The End of Eternity).

The red line is our current past light cone; the light of everything we see now was emitted on this line.

But clearly lots of the Universe was. Lots of object in the Hubble Deep Field.... were moving away from us at faster than the speed of light when the light was emitted. How cool is that?

This might make you scratch your head a little. But how? I suggest you have a read of this paper, but basically, the journey of light through the Universe is complicated by how space has expanded over cosmic history, and just because an object is moving faster than light when the radiation was emitted does not necessary mean you can't see it.

One last question - Are there objects moving at faster than the speed of light NOW that we will see in the future? Again, the answer is yes. Let's zoom in on the above figure. 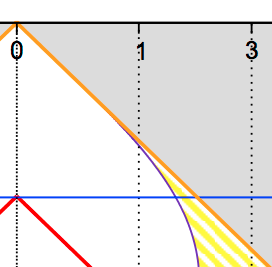 We're at zero, and the dotted vertical line is our infinite future. Blue is today and purple is Hubble Sphere. Again, those in white are moving slower than the speed of light, and those beyond are moving faster.

Remembering that light rays travel at 45 degrees in these coordinates, in the future we can construct a past light cone that hits the yellow region today, so there are objects moving faster than the speed of light today that we will see in the future.

The orange line is our ultimate light cone, our future event horizon, which separates events that we can see from those we don't. This has major implications for what we will see in the future, but means that the Universe will become a dark, cold place. But there are things that need to be done, so more on that later.
Big Bang Cosmology
Location: Sydney NSW, Australia