Just how big is Andromeda?

January 05, 2014
A quick post as I wait for the first coat of paint in the kid's bedrooms to dry.

There's been a picture floating around on the interwebs showing a composite of the full Moon and the Andromeda Galaxy. Here it is. There is a discussion of this image over at Bad Astronomy, and it's a composite of an image taken by Stephen Rahn (over on flikr) and an image of Andromeda taken by GALEX, made by Tom BH.

Anyway, as you know, the disk of Andromeda is not all there is to the galaxy, and as part of the Pan-Andromeda Archaeological Survey (PAndAS) we've been mapping out the substructure into the halo of Andromeda. What if we plonked that on the above image? Well, I've done that and made the following (and credit to Stephen Rahn for the original image). 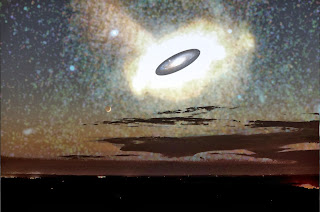 How cool is that? It's an optical image of Andromeda itself on the same scale as in the GALEX image, but now I've also included the debris that we find in PAndAS.

Just outside the main disk, there's a train wreck of material, being composed of an faint extended disk, stretching out from the bright spiral disk, and lumps, bumps and shreds of almost destroyed dwarf galaxies and debris thrown out from the inner parts of the galaxy.

While these are signs that Andromeda is a cannibal, there are more telling signs, namely the giant stellar stream stretching off to the top, as well as the Northern Stream (in blue) poking into the clouds at the bottom. If we could see the Giant Stellar Stream, it would stretch over a reasonable chunk of the sky.

It's a real shame that our eyes aren't 4-m across and can't integrate up flux the same way as a CCD - the sky would be an extremely interesting place to look at.