The PAndAS view of the Andromeda satellite system

August 10, 2013
It's been a tough week, especially battling the jet-lag (a few of my colleagues will have received email from me at 3am as my body refused to believe it was back in Australia!). This week, I'm please to post some science, with a new paper accepted for publication.

As you will have seen over the years, we've had a number of discoveries from the Pan-Andromeda Archaeological Survey (PAndAS). This is an immense data-set, from which we've discovered many dwarf galaxies and globular clusters. The most obvious of these, the largest and brightest, are easily spottable by eye (as proved by our globular cluster spotter-by-eye extraordinaire, Avon Huxor).

But with all this data, it's not only the obvious (or even slightly harder to detect) which we are after, we want to know what is also there, down at the very basic levels of the data. This is the focus of this paper by Nicolas Martin.

The paper is very technical, but the basic idea is straight-forward. We want to find dwarf galaxies, and we know a couple of key things about then, namely how the stars are distributed on the sky, and how they are distributed in colour-magnitude space.

As I've noted previously, given the distance to Andromeda and the limits of our observations, we can really only see stars on the red giant branch. So, here's all the stars in the PAndAS data 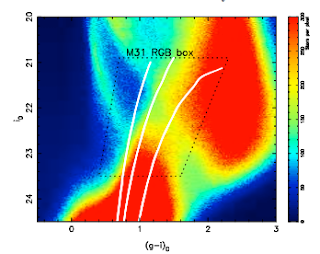 The box in there shows where we expect the red giant branch (RGB) should sit, Now, all the other stuff at the top is from our Milky Way, blooming contamination that we want to get rid of. Down on the bottom, we get into the noise, where distant galaxies look like stars and make it into the catalog. Chuck those out as well.

Nicolas does an excellent job of cleaning out the Galactic contamination in our RGB box. This comes from fitting a large scale, smoothly varying model for the stars in the Milky Way, and then subtracting it. Here's what we get.

The one at the end is lovely as it shows the substructure flying around Andromeda, all bits of smaller galaxies that have been ripped apart. Here's a nicer view. 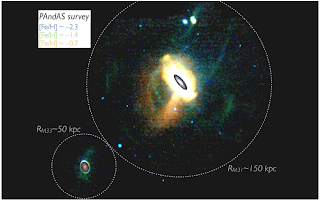 Very nice! You can see so many streams and chunks in there, some of which we are working on at this moment. It is very interesting to compare such a picture to simulations of galaxy formation, such as this one 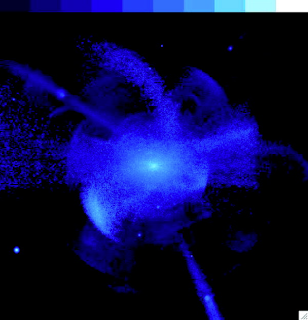 from Bullock and Johnston. These images are on roughly the same scale, and we can see a lot of similarities between the two. Well be writing more on this later.

Anyway, that simply cleans up the data. After that, Nicolas gets into some serious nitty-gritty, picking up all of the smallest structures and assigning a significance to each of them. I'm going to jump to the money shot 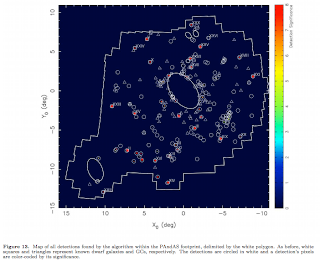 Each of the little shapes here on the map is a detection of a potential dwarf galaxy. Luckily, we find all the ones we found by eye (phew!) plus lots of possible dwarf galaxies. Now, they all aren't dwarfs, some are noise spikes, but we're going to need more observations to sort the real from the fake. 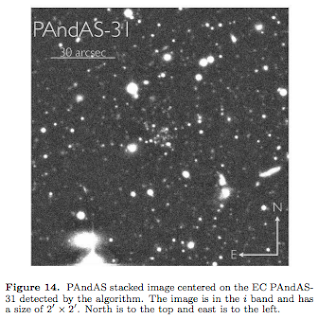 But you can see all the stuff in there that makes finding faint stuff difficult. It ain't easy. Well done Nicolas!!

The PAndAS view of the Andromeda satellite system - I. A Bayesian search for dwarf galaxies using spatial and color-magnitude information

We present a generic algorithm to search for dwarf galaxies in photometric catalogs and apply it to the Pan-Andromeda Archaeological Survey (PAndAS). The algorithm is developed in a Bayesian framework and, contrary to most dwarf-galaxy-search codes, makes use of both the spatial and color-magnitude information of sources in a probabilistic approach. Accounting for the significant contamination from the Milky Way foreground and from the structured stellar halo of the Andromeda galaxy, we recover all known dwarf galaxies in the PAndAS footprint with high significance, even for the least luminous ones. Some Andromeda globular clusters are also recovered and, in one case, discovered. We publish a list of the 143 most significant detections yielded by the algorithm. The combined properties of the 39 most significant isolated detections show hints that at least some of these trace genuine dwarf galaxies, too faint to be individually detected. Follow-up observations by the community are mandatory to establish which are real members of the Andromeda satellite system. The search technique presented here will be used in an upcoming contribution to determine the PAndAS completeness limits for dwarf galaxies. Although here tuned to the search of dwarf galaxies in the PAndAS data, the algorithm can easily be adapted to the search for any localised overdensity whose properties can be modeled reliably in the parameter space of any catalog.