The Three-Dimensional Structure of the M31 Satellite System; Strong Evidence for an Inhomogeneous Distribution of Satellites

February 23, 2013
Back in Sydney after a busy couple of days in Brisbane at the Seventh ANITA (Australian National Institute for Theoretical Astrophysics) Workshop. It was a good two days listening to talks on the cutting edge theory (a lot by very smart PhD students and postdocs). A quick look at the program shows the incredibly diverse range of cool science being done in Australia.

But a quick post (as I am still playing astro-ph catch-up), but it's time to post an excellent paper from proto-doctor Anthony Conn (proto- as his PhD has been submitted and is being examined). But the paper provides a key input to our recent Nature paper, namely nailing the distance to the dwarf galaxies orbiting Andromeda.

I've written before about Anthony's sterling work using Bayesian techniques to provide the most accurate and robust distances, using the tip of the Red Giant Branch. It's not easy work and has consumed more than three years of work. But results, as you know, have been excellent.

What is essential to know is that while Nature is considered one of the top journals to publish in for astronomers, their papers are often very concise and condensed. This paper presents the nitty-gritty of measuring the distances.

There are a lot of technical things which are important in such a scientific paper, the stuff you don't see in the press-releases, but are needed to convince other academics. These include selection functions, and errors distributions, and many others. I'll summarize these with one of the pictures from the paper :) 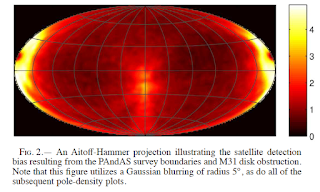 The paper then took the three dimensional distribution of dwarf galaxies and started looking for significant planes, planes where there more galaxies aligned than you would expect from random. As you can guess from the Nature paper, we found one very significant plane, which has the properties that have been described before. 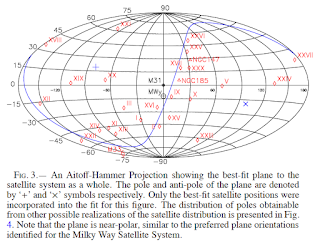 Again, it would bad to underestimate just how much effort this took, with computers chugging away for weeks at end, with us sitting there waiting for it to spit out the answers. Lots and lots of waiting, and then checking, and waiting, and checking. And then making pretty pictures.

So to close, it's important to remember that behind every press-release, there's a story, a story of hard work and effort (well, there should be at least). If you are writing a press release about your cool scientific result, then add a link to you paper. And if you are reading a press release, and get a chance to check out the paper, then you should. You may not understand every work or figure in the paper, but you might get a chance to appreciate the effort that has gone into the work. And that's not a bad thing.

The Three-Dimensional Structure of the M31 Satellite System; Strong Evidence for an Inhomogeneous Distribution of Satellites


We undertake an investigation into the spatial structure of the M31 satellite system utilizing the distance distributions presented in a previous publication. These distances make use of the unique combination of depth and spatial coverage of the Pan-Andromeda Archaeological Survey (PAndAS) to provide a large, homogeneous sample consisting of 27 of M31's satellites, as well as M31 itself. We find that the satellite distribution, when viewed as a whole, is no more planar than one would expect from a random distribution of equal size. A disk consisting of 15 of the satellites is however found to be highly significant, and strikingly thin, with a root-mean-square thickness of just $12.34^{+0.75}_{-0.43}$ kpc. This disk is oriented approximately edge on with respect to the Milky Way and almost perpendicular to the Milky Way disk. It is also roughly orthogonal to the disk like structure regularly reported for the Milky Way satellite system and in close alignment with M31's Giant Stellar Stream. A similar analysis of the asymmetry of the M31 satellite distribution finds that it is also significantly larger than one would expect from a random distribution. In particular, it is remarkable that 20 of the 27 satellites most likely lie on the Milky Way side of the galaxy, with the asymmetry being most pronounced within the satellite subset forming the aforementioned disk. This lopsidedness is all the more intriguing in light of the apparent orthogonality observed between the satellite disk structures of the Milky Way and M31.