September 22, 2012
It has been a busy week, with a talk to the Macarthur Astronomical Society on Monday, and to the Astronomical Society of New South Wales last night. And if you were in Blighty on Wednesday at 4am, you would have heard me join dr karl on Radio 5 Live's graveyard shift to talk about why high speed protons don;t become black holes, but that is the topic for another post.

As I mentioned, I've recently been teaching electromagnetism, and I like to take a little bit of a side-ways glance at derivations and equations. Why? Because sometimes those given in text books can appear a little too idealized or simplified.

One of the things that you have to talk about in electromagnetism is Gauss's law. Mathematically, Gauss's law can seem quite intimidating to a first year student, even those in our advanced class, but let's take a look at what it means in a simplified sense, and then something a little more complicated.

Right, the maths (and to our American cousins, it is maths, not math. Mathematics is the plural of the word mathematic). 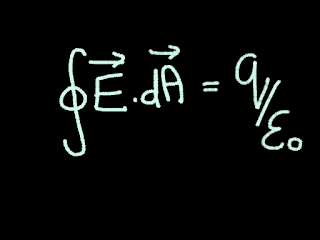 If you are feeling mathematically challenged at this point, let's try and understand what we are looking at here. The right had side is the amount of charge in a region (the q) and the thingy on the bottom is a constant of nature, the permittivity of free space. What's the flippy thing on the left. Let's look at this in picture terms. 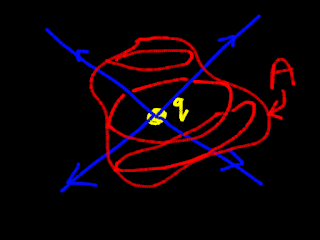 Thanks to the genius of Michael Faraday, we talk about idea of the electric field, which we think of each charge in the universe being the source (if positive, sink if negative) of electric field lines (the blue lines in the above picture). The number of lines is dependent upon the amount of charge, so doubling the charge makes twice as many blue lines.

So, what is the right side of the equation telling us? Imagine we consider a surface around the charge (the red, badly drawn thing in the picture above), then the what the right hand size effectively does is count the number of blue lines going through the surface; in this case 4.

When students are introduced to this, you usually have the following picture. 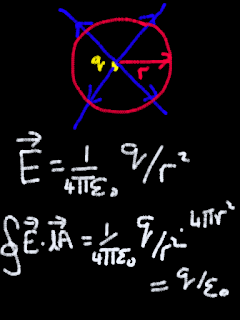 Firstly, we make the surface a sphere. We can work out the size of the electric field on the surface of the sphere using Coulomb's law (that's the first bit up there, and yes, I know that I left the unit vector of on the right hand side). The integral simply becomes the size of the electric field over the surface, multiplied by the area of the surface (I've not worried about the vector dot product which we will return to in a minute). The simplicity of choosing a sphere makes the problem, well, simple.

But let's consider something a little more complex. Let's put the charge at the centre of a cube, with a side length of 2a. 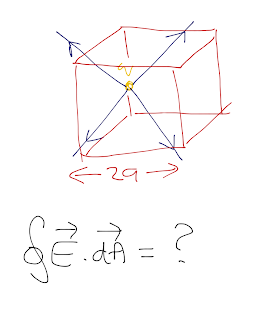 For those that don't like maths, look away now. First, the geometry of the problem 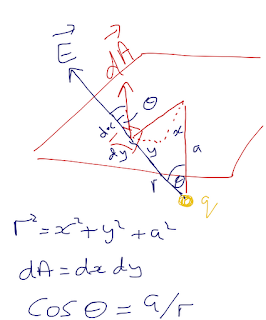 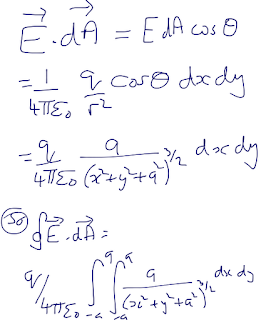 Ugh... Ugly integral time (and not strictly correct, as this is an integral over one face of the cube, and so is not over the entire surface). But we are saved! No more slogging over integrals, now we can use wonderful software like Mathematica to do them for us. So, what do we find?

But this is the integral through one face of the cube, and as we noted above, we need to multiply this by 6 to get the total over the cube. And this is simply the right hand side of where we came in.

Gauss's law works for a cube (which, of course, we knew it would :). Right, back to the grindstone.