How does the Hubble Sphere limit our view of the Universe?

March 03, 2012
Well, this caps of a busy, but successful week, but Pim van Oirschot (PhD student in the Netherlands, was my MSc student here in Australia a couple of years ago) and I just had a paper accepted for publication. It's called "How does the Hubble Sphere limit our view of the Universe?" and is basically a response to some other papers published over the last years.

Let's start with the basics, as in what is the Hubble Sphere? For gory details, I recommend the classic paper by Ed Harrison, but simply put, the Hubble Sphere is the distance from us which objects are moving (relative to us) at the speed of light.

We know the Universe is expanding, and that expansion is measured in terms of the Hubble Constant, which is about 72 km/s/Mpc. What this means is objects 1Mpc away are moving away from us at 72km/s, those at 10Mpc are moving at 720km/s, 100Mpc at  7200km/s etc etc. So, if you go far enough, objects will be traveling at the speed of light, and then even further go faster than the speed of light.

This often freaks people out, basically because people get taught special relativity first, with the mantra of "you can't travel faster than light", and then don't know how to understand this statement in terms of the curved space-time of general relativity.

I grabbed the above picture from Tamara Davis, who wrote an excellent paper on misconceptions in cosmology a few years ago. The important one is the top picture which presents the history of the universe in terms of distance along the bottom and time up the side.

The dotted lines are objects in the universe (i.e. other galaxies) at at the Big Bang the distance between all objects is zero, so they all are at the origin. The Hubble Sphere chops the universe into those objects moving slower than the speed of light (with respect to us) and those moving faster.

The light cone is the path of a light ray from the Big Bang to us today. The thing to note is that the light ray changes directions from moving away from us to be moving towards us at the Hubble Sphere.

Here's my version from my paper; 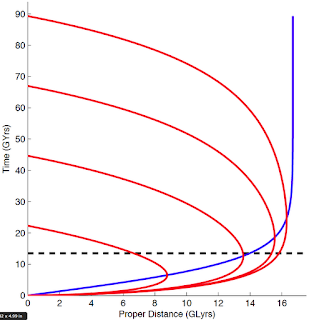 Now, this recent paper says that there is something important about the Hubble Sphere, namely that light rays we receive today have never been out to distances greater than the Hubble Sphere today. This appears to be the case in the above picture.

But the above picture assumes that we have a "cosmological constant" acting as dark energy. If we change the properties of dark energy, namely making it Phantom Energy instead, then something cool happens. 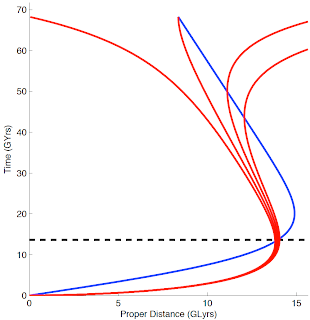 At the start, things look the same, but into the future, the Hubble Sphere actually starts to contract. And as you can see, light rays that we receive in the future will have gone out to a much larger distance than the Hubble Sphere is when the photons are received, showing that the previous claims are not generally true.

We've got a bit of history dealing with some claims about the Hubble Sphere, and I might write about them sometime. For now, I'm going to enjoy another soggy weekend in Sydney.

How does the Hubble Sphere limit our view of the Universe?


It has recently been claimed that the Hubble Sphere represents a previously unknown limit to our view of the universe, with light we detect today coming from a proper distance less than this "Cosmic Horizon" at the present time. By considering the paths of light rays in several cosmologies, we show that this claim is not generally true. In particular, in cosmologies dominated by phantom energy (with an equation of state of \omega < -1) the proper distance to the Hubble Sphere decreases, and light rays can cross it more than once in both directions; such behaviour further diminishes the claim that the Hubble Sphere is a fundamental, but unrecognised, horizon in the universe.